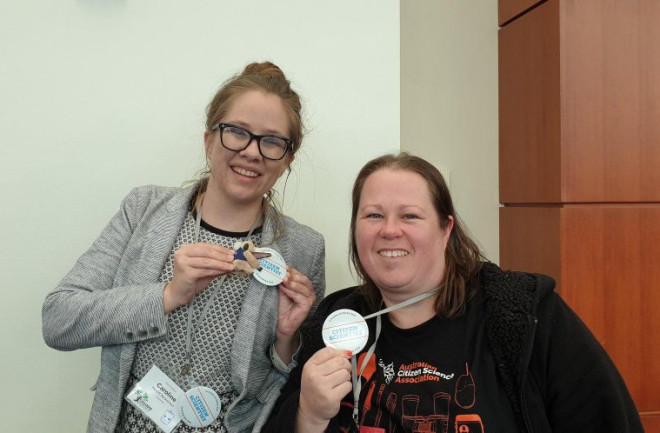 Michelle and I with our “citizen scientist” buttons! If you look closely, a small koala has also adopted my button as its new habitat. (Credit: C. Nickerson)

As the interviewer and the author of this post, I’ll reveal my bias now: meeting Michelle Neil, the secretary and social media moderator of the Australian Citizen Science Association, was a highlight of the Citizen Science Association’s conference for me. I’m an unabashed Michelle fan. She sat down with me this past March in Raleigh for a wide-ranging discussion of how she got into citizen science, citizen science in Australia, and her future plans for this work. Michelle wrote about her experience at the conference in this blog post.

In the months since the conference, she’s been busy! This fall, Michelle unveiled a new citizen science project called Space Scurvy.  Michelle poses a question: if you were going to outer space, and you wanted to avoid getting scurvy, what juice would you take with you? To answer that question, she empowers students and members of the general public to quantitate Vitamin C in juice. Consumption of Vitamin C helps prevent scurvy, and the results of this test would assist any intrepid astronaut in their pre-trip meal prep — while also providing valuable research data about the amount of Vitamin C in different juices from all over the world. Space Scurvy is hosted on Anecdata.org and is a SciStarter affiliate, meaning that, if you use the same email address to sign up for SciStarter and Anecdata.org, you’ll earn credit for your contributions on your SciStarter Dashboard! You’ll read a little bit about Space Scurvy in the interview section, below.

Without further ado, our interview!

This interview has been edited and condensed.

Michelle: Can I say g’day?

Michelle: G’day. My name is Michelle Neil and I’m from Brisbane, Queensland, Australia. I’m the secretary and social media moderator for the Australian Citizen Science Association.

Caroline: Tell me a little bit about the Australian Citizen Science Association. How did it start? When did you come on board?

Michelle: It’s a bit of a long story. In January of 2014, I was at the Australian Science Communicators Conference. And one of the guys there from Earthwatch, Chris Gillies, said, “Hey, the Americans are starting this Citizen Science Association. Most of us here are involved in citizen science; we should start our own organization.” He told people at the conference, “If you’re interested, come and meet me in room such and such.” He got a massive amount of people coming, and I went and had a look. Before then, I had found citizen science sort of by accident; I was just doing citizen science with my kids without knowing what the term was. And for that matter, I didn’t really know about the formal term or role of a science communicator, either, even though I had been doing it. It was all new to me — a whole new world. I thought it was so interesting.

Caroline: What happened when you went to that meeting?

Michelle: I went at first just to see what it was going to be about. I wanted to know which sort of projects there were and what I could get my kids involved with. I’d been working a bit with TeachWild, which is EarthWatch’s education arm in Australia, and for about ten years, I had volunteered with CSIRO’s STEM Professionals in Schools, a program that pairs up teachers with professional scientists — so I soon  I started thinking that I could get teachers involved with citizen science. With that in mind, we formed into groups of working parties and worked out how we were going to actually start this association. In total, we had 89 people on the 10th of May, 2014 turn up to the Queensland Museum for this workshop to start the Australian Citizen Science Association.

Caroline: What working group did you end up in?

Michelle: I ended up on the communications side of things. I think communication is so important, because otherwise, I never hear about this stuff. I also really wanted to know metrics.  I come from an analytical chemistry background, where metrics is everything and it’s all about data, data, data.  I started asking them, “What’s your communications strategy? What’s your plan?” And because they didn’t have one, they replied, “Well, good, you can help head up communications team.” And I said okay!

Caroline: What happened next?

Caroline: How did it go?

Michelle: To give people an idea at home, Australia is roughly the same size as continental USA. Where I’m from in Queensland, for example, is actually twice the size of the state of Texas. In Australia, we’ve got around about 22 million people. In Queensland, we have about 5 million roughly. We had a few people from overseas, too. 198 people total came to our conference, which was awesome. We just came out of our second conference in Adelaide, and now I’m looking forward to welcoming people to my hometown of Brisbane for our third conference in 2020! We’re now a registered charity in Australia, and we’ve also been accepted as a member of United Nations Environmental Program.

Caroline: When an Australian wants to get involved with the Australian Citizen Science Association, what do they have to do?

Michelle: You can be a member whether you’re from Australia or overseas — doesn’t really matter. Just head over to our website, sign up, and then you can get our t-shirt!

Caroline: I’d be able to join?

Michelle: Anyone can join!

Caroline: So when someone joins the association, what’s next after that?

Michelle: You get to opt into our newsletters, you get discounts to our events, and you can be part of a regional chapter.

Michelle: We couldn’t decide during our last conference what we wanted to put on the t-shirt. So we gave it to a couple of our core people in our group, and they put different tools of citizen science on the t-shirt. So you’ve got a boot to reference those people who go out looking for observations. You’ve got a telescope for the amateur astronomers, you’ve got pipettes for the bio community, you’ve got mobile phones for those of us who do stuff from home, and a computer mouse for those of us who do citizen science at home, on the computer. There are binoculars for the bird watchers. Yeah, there’s a whole heap on there.

Caroline: Is there a lot of bird watching and citizen science in Australia?

Caroline: How can someone find citizen science projects specific to Australia, as well as the global ones?

Michelle: We have resources on our website, including a project finder, developed with the Atlas of Living Australia.

Caroline: What are some of your favorite Australian citizen science projects?

Michelle: Frog ID is a really cool app from the Australian museum. It asks you to record frog sounds and then download it onto the app and send it in. We’re finding that it is very popular with some of our older members of the community, because their hands shake a little bit too much to take a photo. And there’s actually a group of people sitting at the Australia Museum with headphones on, waiting to hear those frog calls and tell you what type of frog you recorded. One of mine that I recorded was a striped marsh frog, which I had seen when we first moved into our house 12 years ago, but hadn’t seen since. I didn’t hear a call for about two years, and I started getting really concerned. We’re in the middle of a drought, so it was kind of understandable. But then I heard it one night as I was going off to sleep, and I raced out of the house to record it, and my husband chased after me, saying, “You need your phone!”

Caroline: Do you ever see tourists doing citizen science on Australia while on vacation?

Michelle: Citizen science-based holidays are becoming big in Australia. A lot of the tourism operators are really starting to get into this. I could go to the Great Barrier Reef, don my snorkel, take my camera phone or whatever that’s waterproof, take photos, upload them onto Flickr.

Caroline: What’s some of the outreach you do?

Michelle: This year, as part of my work with CSIRO’s STEM Professionals in Schools, I’m going to canteens in schools — and in Australia, we call them poppers, over here, you call them juice boxes — and we’re trying to discover how much Vitamin C is in those poppers. As part of our National Science Week theme this year, which is “To the moon and beyond,” we’re trying to figure out which poppers those students should take to the moon.

Caroline: How does it work?

Michelle: It’s basically a titration to find the amount of Vitamin C in a known solution and then three poppers.

AUTHOR’S NOTE: Full instructions can be found on Anecdata.org.

Caroline: How has it been going so far?

Michelle: A grade two student — seven years old — walk up to me and ask why they were all drinking the poppers they were at school, because she found that it didn’t have much Vitamin C. The grade twos actually ended up getting together and going to their school management and told them, “We can prove that this particular popper has no nutritional value.” The administration actually changed it, which is really cool.

Caroline: What a great example of citizen science having an impact in Australia.

Michelle: Watch this space! We’re getting bigger and better.

In conclusion, a confession: This interview was supposed to be one of our first podcast episodes, but I quite simply couldn’t figure out how to work my own microphone. Now that I have a bit more of the hang of it (check out SciStarter.org/podcast), maybe I can convince Michelle to come back for a follow-up conversation after next year’s Australian Citizen Science Conference!

Want more citizen science? Check out SciStarter’s Project Finder! With citizen science projects spanning every field of research, task, and age group, there’s something for everyone!