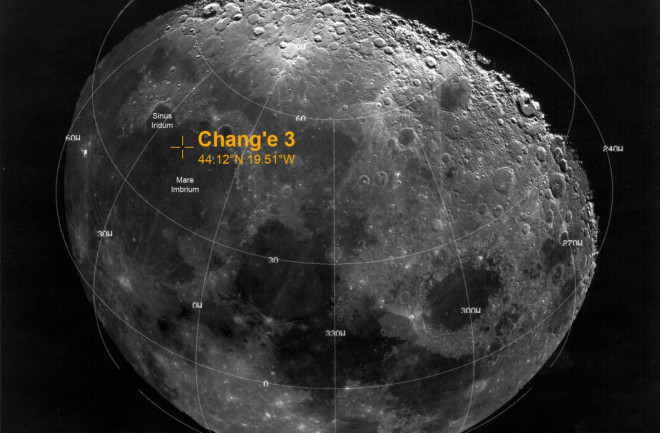 Chang'e 3's landing site. Image courtesy Wikipedia In Chinese astrology, the rabbit represents hope. And scientists in China are holding out hope that the country’s moon rover, Yutu (Jade Rabbit), can be repaired after it experienced a mechanical control abnormality Saturday. The abnormality occurred before the rover entered its second scheduled dormancy period — when the rover shuts down while on the dark side of the moon — early Saturday morning U.S. time, according to Xinhua news agency. The mechanical problem occurred due to a “complicated lunar surface environment,” China’s State Administration of Science, Technology and Industry for National Defense (SASTIND) told Xinhua. It's unclear how serious the malfunction is, or what specifically occurred, since SASTIND offered limited information about the problem. Although details are lacking, a report by Xinhua, written from the perspective of the rover, sounds a dire note. The status report was quoted on CNN:

"My masters are staying up all night working for a solution. I heard their eyes are looking more like my red rabbit eyes. Nevertheless, I'm aware that I might not survive this lunar night."

Scientists are scrambling to find a fix for the rover. In the meantime, millions of users on the Chinese social media outlet Sina Weibo are encouraging scientists by sharing “#hang in there Jade Rabbit.” Jade Rabbit, and its lander Chang’e 3, were set to go dormant for the mission’s second lunar night — which lasts 14 Earth days — when the abnormality was discovered. During the lunar night, there is no sunshine to power Jade Rabbit’s solar panel and exploration ceases. Temperatures also dip to a frigid -180 degrees Celsius during the lunar night, and shutting down the rover helps protect its delicate electronic components. If the rover doesn't hibernate properly, it may not survive its fortnight in the bitter cold. Jade Rabbit has already chalked up some successes since the Chang’e-3 mission (which delivered the rover) made its soft-landing on the moon on Dec. 14. After the mission's first lunar night, the lander’s telescope observed the sky, and its ultraviolet camera observed the Earth’s plasmasphere. Jade Rabbit has utilized its X-ray spectrometer to study material on the moon's surface as well as its radar to study the moon's subsurface composition. Still, the rover was expected to operate for at least three months.