Over the weekend, to prepare for my keynote at the Hope Summit 2010 in St. Louis, I went back through the Unscientific America PowerPoint and added a number of updates and new observations. I may blog a number of the changes, but I want to highlight one of them in particular--I added this figure from the latest Science and Engineering Indicators report out of NSF: 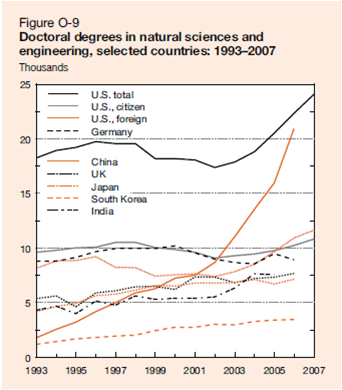 Contrary to popular misconceptions, the U.S. is producing an increasing, not decreasing, number of scientists and engineers right now. But China...whoa. The figures above only go through 2007, and in light of that slope, it may well be that China is producing more science and engineering Ph.D.s annually than any other country in the world by now. What you're looking at, folks, is the rapid birth of a science superpower. So when you hear concerns about declining U.S. leadership in science, there is definitely something to it. In fact, those concerns aren't just rearview mirror watching any more; China is the car that's blowing past us in the left lane. Whether they are producing scientists who are as talented, as well-trained, or as interdisciplinary as American scientists, I can't say. But boy are they ever producing scientists.