Chill. Yellowstone's Volcano Isn't About to Destroy Us All 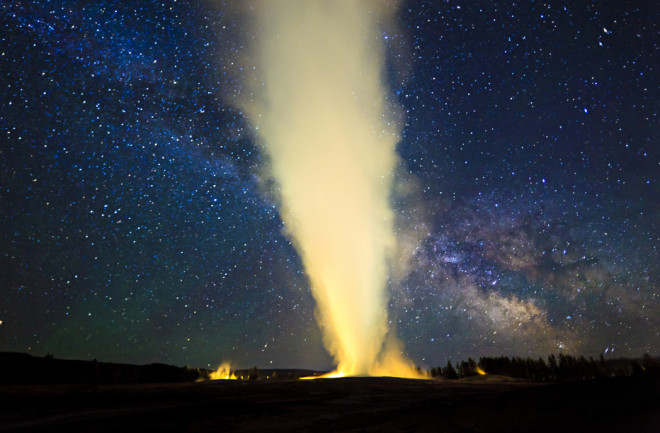 Old Faithful. Richard Mitchell/Getty Images It seems like every year about now, the media decides it is time for yet another Yellowstone scare-mongering session. Over the past few weeks, a number of articles and interviews have made some outlandish claims about the chances of a massive Yellowstone eruption. Yet, all this kerfuffle has come with absolutely no change in the state of Yellowstone itself. Instead, this tempest is purely the product of media "churnalism" that turns very benign source material into panic, doom, and horror. This time around, the Yellowstone noise is loosely based on a disaster preparedness report from the European Science Foundation. The study, called Extreme Geohazards: Reducing the Disaster Risk and Increasing Resilience, isn't new scientific research but rather a position paper that makes the bold claim that "hey, wouldn't it be great if we even thought about being prepared for a large volcanic eruption?" It isn't even solely focused on volcanoes, but makes the point that large volcanic eruptions---the same size or larger than the 1815 eruption of Tambora---are potentially a larger threat to lives and property than we give them credit. Yet somehow, this simple study has been distorted. Many articles claim the scientists are announcing that Yellowstone will erupt at any moment and we're all doomed and yada yada yada. The articles say things like "

the earth is actually in “volcano season,”(nope), that "volcanic eruptions have occurred at their highest rate in 300 years" (again, nope), that "super-volcanoes could erupt within the next 80 years." (They could. And the Browns might win the Super Bowl, too.) In my mind, the most egregious claim is that "scientists predict that the Yellowstone volcano will erupt within 70 years."

That last statement, in itself, is very telling. Never are the scientists named in any of these articles. Never is that statement linked back to an actual source. No self-respecting volcanologist would ever say such a thing---and, more importantly, the geologists at the Yellowstone Volcano Observatory have never, ever even implied such a thing. So, is it in the actual ESF study? Well, I did some digging and found the following:

What about the notion that the Earth is in a supposed "volcano season" with more eruptions in the last 300 years?

So, where did these completely wrong ideas arise? My guess is that we're seeing the results of the internet's massive game of telephone, in which some of the earlier (mostly terrible) articles about the ESF study tried to tie it into Yellowstone and "volcano season." Somehow, we got to the point where all the subsequent articles parroted and distorted the those early articles and the people writing those article couldn't be bothered to read, or even peruse, the actual source material. Physicist Michio Kaku even showed up on Fox News to spread more scaremongering with wrong/misleading information. I mean, could we really not find any volcanologist or geologist to intelligently discuss the study or Yellowstone's chance of activity? The laziness of current media science coverage means we get shoddy reporting, inappropriate "experts" and spreading of nothing but false or misleading information. Where does this leave us? Well, as I have mentioned before about Yellowstone, you should rarely trust any reports about an impending eruption of Yellowstone, unless it is coming from the Yellowstone Volcano Observatory. Right now, the chances of a massive Yellowstone caldera eruption within the next century are infinitesimally small. Even if any eruption at Yellowstone were to happen, it is much more likely to be small eruption, maybe on the scale of Mount St. Helens in 1980. Currently, there are no signs, no evidence, nothing to suggest any eruption is in the works. Even the study that says there is a lot of magma under Yellowstone (and there is) also adds that it is less eruptible magma. In all, Yellowstone is a pretty quiet place. It definitely wouldn't appear in my list of the top 10 volcanoes likely to erupt in the next century. Heck, it likely wouldn't even be in my top 100. That 5 to 10 percent chance of a major eruption somewhere in the world is based on looking at how often we've had Tambora-scale or larger eruptions. This means that it could happen next week or not for 300 years. The probability is low: 90 percent of the time, no eruption Tambora-scale or bigger occurs. If you want to be concerned about the hazards posed by a volcano in the near term, there are a lot better candidates out there. The media loves to make a big deal that if a Tambora or greater happens, civilization would end and chaos would ensue. Well, even in the 1800s, when Tambora caused the "Year Without a Summer," civilization survived. Even with our more interconnected planet and a larger population population, you need to remember that really, as a society, we are also more resilient. We can absorb disasters as materials and foods can be transported easily, medicine exists to stop the disease that can follow an eruption and technology allows us to better understand if an eruption is going to occur---thus, we can prepare. Society can survive catastrophes, but media wants us to think otherwise. So, has the status of a potential eruption at Yellowstone changed? No. Should you live in fear of Yellowstone? No. Should you be prepared for natural disasters? Yes. That's the real key. The ESF study's main point is that we need to think now about these volcanic hazards. We need to invest now in monitoring infrastructure so we can carefully look for clues that an eruption might be in the works. What it doesn't say is that volcanic armageddon is around the corner---and don't let the media try to convince you otherwise.