Astronomers think bright points of light they spotted may be binary stars that have been kicked out of their homes. 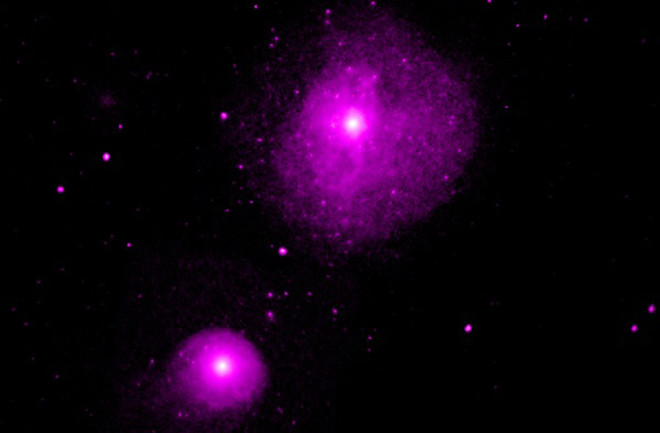 Two galaxies in the Fornax Cluster, NGC 1399 and NGC 1404, glow with X-rays when viewed with the Chandra X-ray Observatory. The bright points of light beyond the galaxies’ outskirts may be binary stars that have been kicked out of their homes. (Credit: NASA/CXC/McGill University/X. Jin et al)

Astronomers have discovered evidence that some stars can be “kicked out” of their host galaxy, based on data collected by NASA’s Chandra X-Ray Observatory.

The stars in question were found in the Fornax Cluster, a group of galaxies located about 60 million light-years from Earth. Chandra stared at these galaxies for a total of 15 days over the course of a 16-year period that spanned from 1999 to 2015. Xiangyu Jin of McGill University, lead author of a paper detailing the find published May 1 in The Astrophysical Journal, says this finding is one of the clearest examples of pairs of stars banished from their home.

Binary systems can contain many different types of stars, including neutron stars. These neutron stars form when a massive star collapses and then explodes as a supernova at the end of its life. But the strong blast from the supernova isn’t always symmetric, and thanks to the recoil from such a blast, the newly formed neutron star knocks itself out of its home galaxy. And sometimes, its companion star is carried along for the ride.

“It’s like a guest that’s asked to leave a party with a rowdy friend,” Jin said in a press release. “The companion star in this situation is dragged out of the galaxy simply because it’s in orbit with the star that went supernova.”

Neutron stars in binary systems are visible in X-rays, which Chandra sees, because they often pull material off their companion star. As the material swirls toward the neutron star, it heats up, giving off X-rays. Because the Fornax Cluster is relatively close to Earth, astronomers could get a good look at the 29 galaxies in the cluster using Chandra. In all, the team spotted about 30 possible spots of bright X-rays they suspect are pairs of stars in the Fornax Cluster that were likely banished from their galaxies.

The team found about 150 other stellar wanderers that appeared outside the boundaries of the galaxies in the cluster. But these stars probably weren’t expelled. The suns may just live in the far outer reaches of the cluster’s central galaxy or they may have been pulled away from the galaxy by gravitational forces during a near encounter with another member of the cluster. Alternatively, the stars could be the remnants of a galaxy that’s lost most of its stars following a collision.

The researchers suspect there are even more pairs of stars that are too faint to be detected by Chandra. Longer observations with Chandra, the team says, will be the key to finding these fainter stars and better understanding how they end up evicted from their home.