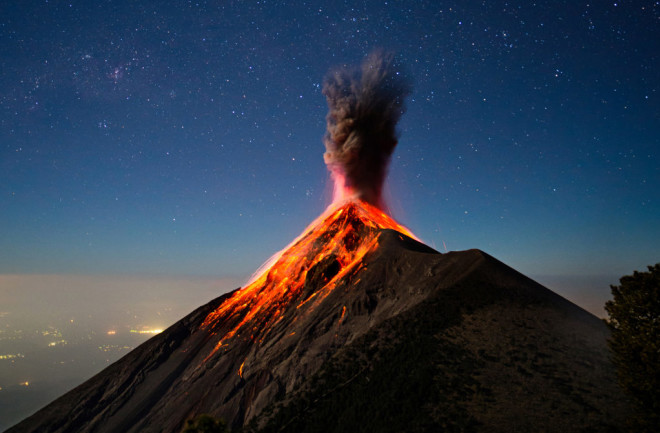 Erupting Volcano Fuego in Guatemala.NikonAndy/Getty Images Time for an update on a pile of volcanic rumbling, with a special focus on Central America: Costa Rica This weekend saw a couple of eruptions from volcanoes across the valley from each other. Turrialba had another strong explosive eruption on June 24 and it was captured on the RSN thermal webcam. If you watch the video, you can see how the volcano was somewhat calmly steaming before a strong increase in ash and other hot debris, forming billowing clouds emitting from the vent. Turrialba had 11 explosions over the weekend. That might sound dramatic, but none were as strong as what we were seeing in May, so overall, the activity at the volcano has lowered somewhat. On June 26, there was almost 10 hours of continuous ash emission, but none of the plumes topped 200 meters (~650 feet). By June 27, most of the seismic unrest at Turrialba had calmed. This doesn't mean we shouldn't continue on this rollercoaster of activity from the volcano, but for now, things have quieted. Meanwhile, Poás had a few small explosions at the volcano's summit crater lake. Now, these explosions were likely steam-driven (phreatic) events rather than new magma reaching the surface, but could be signs of renewed activity. The last eruptive period at Poás ended in October 2014. Guatemala Two volcanoes in Guatemala continue their vigorous 2016. Fuego continued to produce lava and pyroclastic flows to go along with strong ash production. You can see the newest ~800 meter-long lava flows on the INSIVUMEH webcam pointed at Fuego and the volcano has been sending ash and debris over 5 kilometers (~16,500 feet) above sea level. The eruption lasted ~10 hours and due to this continued unrest at the volcano, the restriction zone of 2 kilometers around the vent. This new energetic phase at Fuego is likely to continue and potentially get stronger according to INSIVUMEH volcanologists. Explosive eruptions from Santiaguito (part of Santa Maria) have been even more impressive (see below) than what we're seeing at Fuego. Ash has become a nuisance as far away as the Chiapas province in Mexico, 100 kilometers (~60 miles) from the volcano. These new explosions have sent ash 4-4.5 kilometers (13,000-15,000 feet) above sea level.

(San Miguel) had a small explosion at its summit vent

, the first such outburst since January. The volcano has experienced a number of bouts of activity since it began erupting again in late 2013. The summit area has a nearly-constant gas plume

, suggesting that there is still magma degassing within the volcano. Volcanologists in El Salvador say that people living near the volcano should expect this pattern to continue for the foreseeable future. ChileOne of last year's biggest volcanic stars

, is becoming more restless again. The SERNAGEOMIN raised the alert status at Calbuco to Yellow Alert

. The latest SERNAGEOMIN report on the volcano

reported an increase in earthquakes 8-10 kilometers beneath the volcano combined with the beginning of inflation of the volcano. These two signs would suggest that we might expect more eruptions from Calbuco, although exactly when that might happen is very unclear. If anything does occur, you can watch it on the Calbuco webcam

. Alaska Going the other direction, Pavlof

in Alaska was lowered to Green alert status

after all elevated seismicity ceased. Eruptions renewed at the Alaska volcano in late March

posted this great short video (see below) of an overflight of the crater, showing active steaming and a lot of sulfur (yellow-white material). The darker red-black material is likely scoria from the lava fountains that are the hallmark of the recent eruptions from Pavlof.