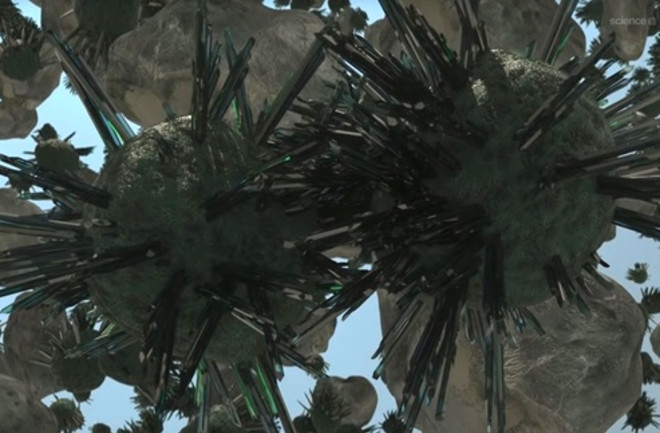 As cement hardens through a process called hydration, the molecules within the mixture develop millions of microscopic crystals, like those seen in this screenshot from the NASA video below. These interlocking crystals help the cement molecules bind with each other, as well as other concrete ingredients like gravel, sand, and small rocks. (Credit: NASA ScienceCasts)

Concrete, in one form or another, has been a staple of human construction for some 5,000 years. Now, researchers have finally brought the ancient technology to outer space. For the first time, scientists have successfully mixed cement — a primary ingredient of concrete — in the microgravity environment aboard the International Space Station (ISS).

As part of an experiment called the Microgravity Investigation of Cement Solidification, researchers sent the basic building blocks of cement — tricalcium silicate, hydrated lime, and distilled water — to the ISS. The ingredients were then mixed in pouches and allowed to harden for 42 days through a process called hydration.

The results show that cement mixed in microgravity can indeed solidify much like it does on Earth. But unlike Earth-made cement, space cement has some unique microscopic features.

Because the new research is the first to compare cement mixed in space to a control batch mixed on Earth, it opens the door to developing better ways to manufacture the substance in various gravitational environments. And if humans are to build a Moon Village or a martian colony in the years to come, we’ll likely need to master mixing cement on other worlds.

Interestingly, the researchers discovered that the space station’s lack of strong gravity made the space cement form with a surprisingly uniform density. Meanwhile, back on Earth, the cement mixed in the control experiment developed a more layered structure due to gravity-induced sedimentation. Study author Aleksandra Radlinska, an engineer at Pennsylvania State University, says that the space cement’s more uniform density should actually make it stronger.

But all other things aren’t equal when it comes to space cement.

The researchers noted another major microscopic difference: Space cement develops many large air pockets, making it more porous than its Earth-mixed counterpart. According to the research paper, published earlier this year in Frontiers in Materials, air bubbles don’t rise to the surface of the freshly mixed space cement like they would on the ground, where buoyancy matters. “Increased porosity has direct bearing on the strength of the material,” says Radlinska in a NASA press release, “but we have yet to measure the strength of the space-formed material.”

A comparison between cement allowed to harden for 56 days in regular gravity on Earth (left) and microgravity on the ISS (right). The large, shell-like features seen in the microgravity sample are trapped air bubbles that lead to increased porosity. (Credit: J. Neves et al. (doi: 10.3389/fmats.2019.00083))

In order to determine whether the more-uniform-yet-more-fluffy space cement is stronger than its ground-mixed sibling, Radlinska says they’ll need to destroy the samples later in 2019, after concluding their microstructural analysis. This will let them determine whether uniformity or porosity plays a bigger role in the cement’s overall strength.

Making Cement on Other Worlds

The obvious benefit of learning how Earth-made and space-made cements differ is that it can help researchers identify and address exactly how gravity impacts the cement manufacturing process. Though this hasn’t been a concern during the past five millennia, considering the dramatic advances we’ve seen in human spaceflight in just the past 50 years, we’ll want to know these things before we start using cement on other worlds.

“On missions to the Moon and Mars, humans and equipment will need to be protected from extreme temperatures and radiation, and the only way to do that is by building infrastructures on these extraterrestrial environments,” says Radlinska. “One idea is building with a concrete-like material in space. Concrete is very sturdy and provides better protection than many materials.”

Concrete, in a basic sense, is simply aggregates like sand, gravel, rocks — or a mixture of all three — glued together with cement. The benefits of concrete are that it’s cheap, straight-forward to make, and can be formed into just about any shape or structure to suit specific needs.

“Concrete is an excellent insulator and radiation shield, hence its used for storage of nuclear waste,” says Radlinska. “The future shelters on [Mars and the Moon] would require thick cover, but a concrete-like binder can be effectively used even in the extraterrestrial extreme conditions.”

And as an added benefit, the gravel and rocks used to make concrete don’t necessarily need to come from Earth. Because it’s the cement that’s actually binding these aggregates together, we should be able to create a form of concrete using aggregates readily available on other worlds, such as lunar regolith — also known as Moon dust.

Because regolith is made of notoriously jagged and fine dust grains, Radlinska says it could potentially help decrease the porosity and increase the strength of the resulting concrete. This is why they’ve already carried out some preliminary work that focuses on lunar regolith. She says they are currently submitting that work for publication.

So, by mixing cement in space for the first time, researchers have not only showed they can do it, but they’ve also set up future avenues of research that will help us fine-tune space cement to fit our specific extraterrestrial needs.

“We confirmed the hypothesis that this can be done,” says Radlinksa. “Now we can take next steps to find binders that are specific for space and for variable levels of gravity, from zero [gravity] to Mars [gravity] and in between.”

Although the researchers are remaining tight-lipped about what specific binders might work best for space cement, Radlinska says, “We have several ideas and [a] working hypothesis of what the next ‘best’ material would be. We can’t disclose these just yet.”