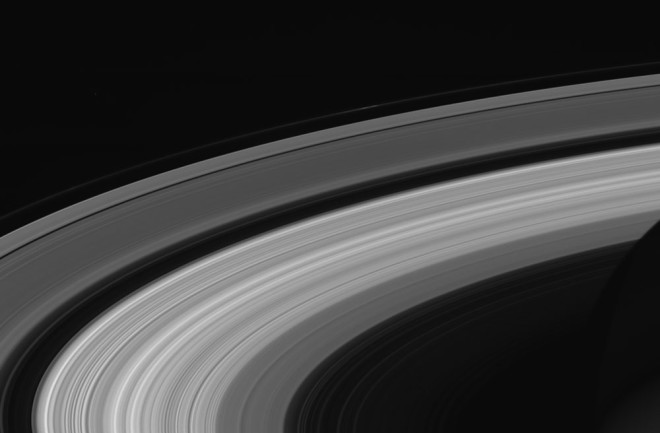 Cassini's final ringscape, taken Sept. 13. (Credit: NASA/JPL-Caltech/Space Science Institute) The Cassini team members filled the chairs of mission control at NASA’s Jet Propulsion Laboratory in Pasadena, California. As a long-time astronomy journalist, I was invited to witness the end of an era. At 4:55 a.m. PST, Cassini’s 13-year mission came to a bittersweet end when we lost signal from the spacecraft as it pierced through the cloud tops at Saturn. We’ve gathered in a lecture hall lined with spacecraft models, Voyager, Juno and of course, Cassini. Few people were without tissues as we watched the action from mission control. Earl Maize, Cassini program manager, runs the communication between the team and the Deep Space Network where they waited for the signal to drop off once Cassini started burning up in the atmosphere. The connection is strong, and we wait for it to fade. Thirty seconds past what they’d estimated, the signal from Saturn flat-lined. “I’m going to call it: project manager off the net,” says Maize. There are no cheers. Mission control is quiet.

Cassini program manager at JPL, Earl Maize, left, and spacecraft operations team manager for the Cassini mission at Saturn, Julie Webster, right, embrace after the Cassini spacecraft plunged into Saturn. (Credit: NASA/Joel Kowsky) People from all over the world have traveled here to say goodbye to Cassini in the place where it was conceived, built and operated. Many of these scientists and engineers have been working on this mission for decades. Careers have been built dreaming of Saturn, planning for Saturn and finally arriving. Though their mission ended today, the Cassini team has gifted humanity intimate views of arguably the most fascinating planet in the solar system. And with Cassini gone, the mood at JPL shifts into something like an Irish Wake, celebratory yet mournful. After leaving their final management roles for Cassini, the team exits the control room to applause and celebration. News cameras light up team members as they embrace and congratulate each other. “We got almost 30 seconds longer than we predicted, all night long the minutes seemed like a long time and then just like that the mission was over,” says Julie Webster, Cassini operations manager. “The spacecraft did everything we asked it to do, right to the very end.”

Somehow it’s harder to hear the final eulogy from its stewards than to lose the spacecraft itself. This was their career project and now they must start anew. And while we may no longer have a home at Saturn, Cassini's leaving behind a legacy untouchable by any other spacecraft in history. It deployed the European Space Agency's Huygens probe, which plummeted through the haze of Saturn’s moon Titan, landing and sending back the only photos of its bizarre surface. Cassini also discovered plumes of water on Enceladus, opening up the possibilities for habitable life on a tiny, far off world beyond the warmer zone of our sun. Sorry Mars, but thanks to Cassini, Enceladus is going to hog those “Is There Life on…” headlines for the foreseeable future. And the potential for extraterrestrial life in Saturn’s neighborhood is exactly why Cassini, a $4 billion spacecraft, had to come to be destroyed. The spacecraft was running out of fuel, and the team wanted to avoid any surprise crash-landing on Titan or Enceladus. Cassini wasn’t sterilized before it departed Earth, and while the the chances were slim it would ever impact either moon, there was still a chance. Cassini could still be harboring some earthly microbes, which could contaminate life that may be thriving on those moons—best not to risk it. It’s not hard to find reasons for Cassini being one of the most, if not the most successful planetary science mission to date. From a flawless launch, a seven-year journey to Saturn and a continuous 13-year science investigation of the Saturnian system—the spacecraft did everything it was ever designed to do. A few years ago, Cassini’s science and engineering team realized it could craft a grand ending for this workhorse, essentially adding an entirely new mission within a mission. By tailoring a new trajectory, the spacecraft collected invaluable data by diving between Saturn and its innermost rings 22 times at a speed of 77,000 mph. NASA, appropriately, called this last series of maneuvers the Grand Finale. This daredevil dance gave scientists an unprecedented look at Saturn’s roiling atmosphere. On the first dive, Cassini beamed back an image of a massive hurricane near the planet’s north pole where winds gusted at 1,200 mph. The eye of the storm was 20 times larger than hurricanes that occur on Earth.

The area within the oval indicates the location in Saturn's atmosphere where Cassini made it's final plunge. (Credit: NASA/JPL-Caltech/University of Arizona) Although the spacecraft may be gone, the sheer volume of information sent back from Cassini over its lifetime will have researchers busy for decades. And stay tuned for a sequel. “We will go back,” says Linda Spilker, Cassini project scientist. Cassini’s legacy will live on through its 356 gigabytes of data collected, the 453,048 images taken, 3,948 scientific papers published, and most importantly, in the collective memory of people around the world who’ve enjoyed a deeper connection to the ringed beauty of our solar system. There’s no doubt today is bittersweet for the team and everyone who’s admired the mission, but we’re only saying goodbye to Saturn temporarily. Eventually, we’ll go back with robots that will swim in the methane seas of Titan, and dig through the ice of Enceladus. And when we long to visit Saturn while we wait, there are almost 500,000 spectacular images to gaze at on Cassini’s website. The team wants us to know that they are looking to the future of planetary exploration using what they’ve learned from this flagship mission to Saturn. Like all exploration milestones, we must know where we’ve been in order to look ahead. Still, Maize was content with savoring the present a little while longer. “There are some things in this world that are just perfect: a child’s laugh, a desert sunset...Cassini and this mission was perfect,” he said.