Cassini shoots through the gap between Saturn and its rings, returning the closest views ever of the planet 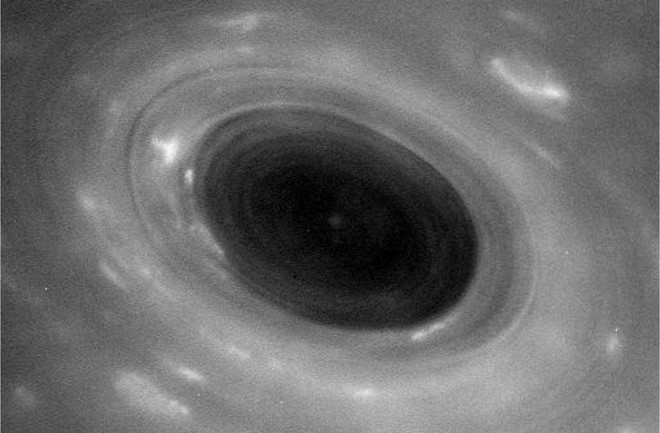 This unprocessed image acquired by the Cassini spacecraft is the closest view ever of the giant hurricane that swirls around Saturn's north pole. It was captured during Cassini's first Grand Finale dive past the planet on April 26, 2017. (Source: NASA/JPL-Caltech/Space Science Institute.) On the first of 22 scheduled dives between Saturn and its innermost rings yesterday, Cassini zoomed at 77,000 miles per hour to within 1,900 miles of the planet's cloud tops — and emerged intact. After re-establishing contact with ground controllers very early Thursday morning, the spacecraft began returning the closest views yet of the gaseous planet's atmosphere. The unprocessed image above was acquired toward the start of the dive at 7:49 a.m. on April 26, 2017. It shows the behemoth eye of a hurricane swirling at Saturn's north pole. About 1,200 miles across, the persistent feature is about 20 times larger than the average hurricane eye on Earth. In a statement released by NASA, the mission's manager was ebullient:

"No spacecraft has ever been this close to Saturn before. We could only rely on predictions, based on our experience with Saturn's other rings, of what we thought this gap between the rings and Saturn would be like," said Cassini Project Manager Earl Maize of NASA's Jet Propulsion Laboratory in Pasadena, California. "I am delighted to report that Cassini shot through the gap just as we planned and has come out the other side in excellent shape."

Source: NASA/JPL-Caltech/Space Science Institute This image appears to show closeup detail of Saturn's cloud tops near the edge of the hurricane eye. Cassini's first successful dive is part of what NASA is calling the "Grand Finale."

SEE ALSO: Going boldly where no spacecraft has gone before—on a dive between Saturn’s rings and the planet itself

During this final chapter, Cassini loops Saturn approximately once per week, making a total of 22 dives between the rings and the planet. Data from this first dive will help engineers understand if and how they will need to protect the spacecraft on its future ring-plane crossings. The spacecraft is on a trajectory that will eventually plunge into Saturn's atmosphere -- and end Cassini's mission -- on Sept. 15, 2017.