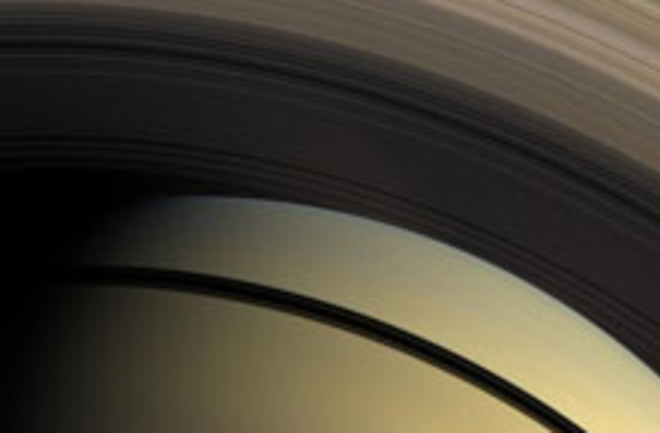 When we last covered NASA's Stardust mission a couple weeks ago, we noted that it was one of those missions that just keeps popping up as new findings from its data makes the news. But Stardust might by outdone by another: Cassini, which continues to reveal new surprises about Saturn and its moons—not to mention sending back beautiful images like this new batch. Today in the journal Science, Cassini researchers review six years of Saturn science (here and here) by the hardy spacecraft. The first review tackles the planet's atmosphere and magnetosphere. Before Cassini, scientists thought that the magnetosphere, the shield from the solar wind that forms around a planet, contained nitrogen ions that had come from Saturn's largest moon, Titan. Cassini showed that wasn't so, and that wasn't the only surprise about the magnetosphere:

The spacecraft's observations showed that it is dominated by water, part of which comes from water vapor plumes that shoot out of geysers on the surface of Saturn's moon Enceladus. "The big news is that Saturn's space environment is swimming in water," said Tamas Gombosi, a Cassini scientist [Space.com]

And then there are those rings. The scientists released these new photos with the studies.

These images are true color, except the black-and-white one and the one with the bluish ring, which is enhanced. You can see the reddish tinge in some of the rings [io9]

. Cassini showed that these famous features are not serene circles, but active and mysterious regions. That reddish tinge Cassini spied comes from a contaminant that still hasn't been identified. Also, the mission documented the perturbing objects and pulls of the moons that shake up the rings.

With Cassini the rings "went from like a very beautiful cardboard cutout ... to a real 3D structure," said Jeff Cuzzi, Cassini's interdisciplinary scientist for rings and dust [Space.com]

. Cassini has already been in Saturnian orbit since June 2004, and with its recent mission extension, will keep studying the mysteries on Saturn, Titan, Enceladus, and more until 2017. You can keep up with Cassini on Twitter. And while you're at it, follow us. Related Content: 80beats: More Watery Eruptions, and More Head, On Saturn's Moon Enceladus 80beats: Cassini Probe Finds “Ingredients For Life” on Saturn’s Moon Enceladus 80beats: Antifreeze Might Allow For Oceans—And Life—On Enceladus 80beats: Does Enceladus, Saturn’s Geyser-Spouting Moon, Have Liquid Oceans?Images: NASA/JPL/CICLOPS