Cassini Scientist Would Be Surprised if Life Doesn't Exist on Enceladus 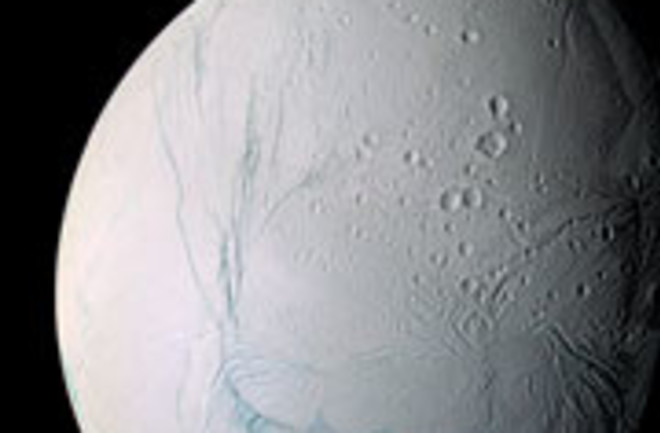 The Cassini spacecraft has entered its final hours. And with the end nigh, Discover called up the Southwest Research Institute’s Hunter Waite — a Cassini principal investigator — for a look back at how this has redefined our view of where alien life might live in our solar system.

Before reaching Saturn in 2004, astronomers knew little about the gas giant’s many moons. Voyager got a glimpse of the system decades earlier. And Titan — the only known moon with a thick atmosphere — seemed like the best bet for learning about alien life. It seemed a solid proxy for early Earth. So scientists, led by the European Space Agency, landed the Huygens probe the moon’s surface.

Titan indeed proved fascinating. But the real surprises came from a tiny iceball of a moon: Enceladus. Beneath its cracking outer shell, Cassini discovered a vast and active ocean.

And just this year, we learned that alien microbes — if they exist — could feast beneath the icy surface of Saturn’s moon Enceladus. In April, astronomers announced the Cassini spacecraft had discovered a chemical mix erupting from Enceladus’ oceans that bacteria eat at earthly hydrothermal vents. The spacecraft had already shown the vents themselves likely exist on Enceladus, too.

With the mission ending this week, Cassini has already made the case to return: Life is possible on Enceladus.

What did we know about Enceladus before Cassini?

We knew nothing. We didn’t know anything about the vents. We didn’t know anything about the global ocean. We knew it was a small, icy moon in the Saturn system, but the Saturn system is full of small, icy moons. There was nothing special about it until we got there and figured out that it was blowing all this material out of the South Pole, and that it represented material from an interior ocean. Cassini wrote the book on Enceladus for sure.

If we had known about Enceladus and its vents, do you think we would have sent Huygens to Enceladus instead?

If we knew what we know today, the answer would have to be yes. But that’s a tall bill to fill. There was no good way to make that leap without having Cassini. I mean it took us years and many flybys — we had 22 flybys of Enceladus to sort all this out.

What would it be like flying along with Cassini over Enceladus? Give me the Starship Enterprise windshield view.

The action happens pretty fast because you’re traveling at seven or eight kilometers per second. And (Enceladus) is pretty small — it’s like the size of Arizona. You’re getting pummeled by these little ice grains. As you’re flying over, you’ll see these geological features — these scars — little channels, basically — what we call the “tigers stripes.” Within those tiger stripes are the vents. It’s venting straight from a global ocean. And above the surface of the ocean, a splash comes up — you can imagine a splash from a wave — that will instantly freeze. That’s what creates these grains. These then have information about the salt content of the ocean and some of the organics that are present there.

How close did Cassini get to taste the ice and gas in this latest discovery?

We’ve been detecting them as far out as a thousand kilometers. But in this particular case, we went really close, it was about 50 kilometers — it was the closest flyby over the over the tigers stripes. We could look at the chemical balance and determine that the (hydrogen) we saw was sufficient to provide food for microbes. The obvious message is let’s go back and try to find life.

At this point, would you be surprised if we didn’t find life on Enceladus?

I would be a bit surprised, yes. But I would be happy to find the answer one way or the other because I think both of them — whether you find it or not — will lead to a better understanding of how life arose on Earth and what it really means.

Why is it important to know if there’s not life?

Because then we don’t really know what we’re talking about when it comes to what habitability is — what it means. We think if the conditions are right, life should be there. It should be part of the overall nature of things. We’ve looked at our own system and said ‘OK here’s the things you need to make it work,’ and if we have not properly analyzed that, then we need to know what is missing. Why isn’t it there?