Cassini: Going boldly where no spacecraft has gone before—on a dive between Saturn's rings and the planet itself 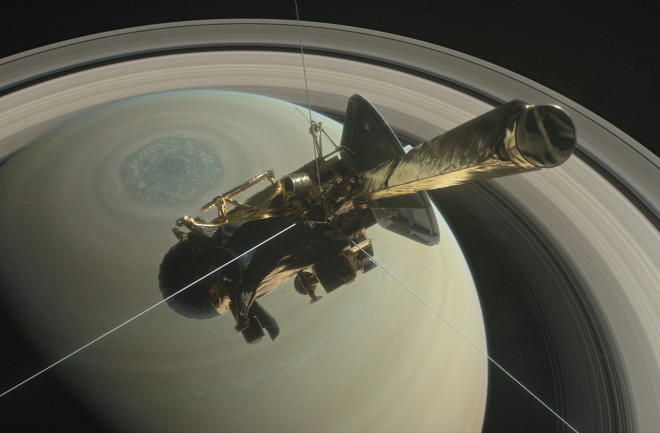 This artist's rendering shows NASA's Cassini spacecraft above Saturn's northern hemisphere, heading toward its first dive between Saturn and its rings on April 26, 2017. (Source: NASA/JPL-Caltech) On July 1, 2004, Cassini became the first spacecraft ever to orbit Saturn. And today, the spacecraft has likely achieved another milestone: Using its 13-foot-wide high-gain antenna as a shield, it probably has made the first ever dive between the rings and the giant gaseous planet itself. I say "probably" because the spacecraft is not in contact with Earth right now, so scientists do not yet know how it fared. The earliest that it is expected to regain contact, via NASA's Deep Space Network, is about midnight tonight, which is 3 a.m. EDT on Thursday, April 27. This is the first of 22 scheduled dives between Saturn's innermost ring and and its uppermost atmosphere. NASA is calling this the "Grand Finale," and it is intended to provide scientists with data never envisioned in the mission's original plan. That includes detailed measurements Saturn's gravitational and magnetic fields and of the rings' mass, as well as sampling of the atmosphere. It's also hoped that Cassini will send back incredibly vivid, close-up images of Saturn's rings and clouds. "What we learn from these activities will help to improve our understanding of how giant planets — and families of planets everywhere — form and evolve," NASA says. https://twitter.com/CassiniSaturn/status/857157307213389824 The Grand Finale will end with Cassini completing its 20-year mission by falling into Saturn's atmosphere. This will ensure that the biologically interesting worlds Enceladus and Titan will not be contaminated by any hardy microbes that might have stowed away on the spacecraft and survived the mission so far. I'm looking forward to Cassini regaining contact with Earth and transmitting images documenting its journey through a region where no spacecraft has gone before. Stay tuned.