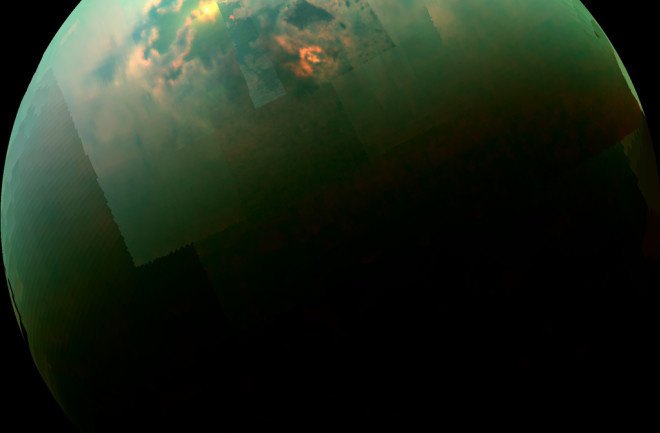 Saturn's moon Titan holds lakes and seas that change with the seasons, much like Earth's own water reservoirs. (Credit: NASA/JPL-Caltech/University of Arizona/University of Idaho) Before NASA's Cassini spacecraft plunged into Saturn’s depths, it performed a final 2017 flyby of Titan, Saturn’s largest moon. This remote world is the only place in the solar system other than Earth that hosts large bodies of standing liquid. Titan's liquid is methane and ethane instead of water. But these lakes and seas make the moon one of the most interesting places in our solar system. And researchers are just starting to learn how these bodies of liquid change with Saturn's seasons.

Cassini’s last tour of Saturn’s moon revealed that some of its northern lakes are 300 feet deep, but small in surface area and perched atop high hills. The shape and location of the lakes hints strongly that the lakes are similar to karstic lakes on Earth, where liquid eats away at and eventually collapses the bedrock around it. On Earth, this happens with water and limestone, but on Titan, it would be liquid methane and the icy organic materials that make up Titan’s surface layers. Researchers published their finding April 15 in Nature Astronomy. In a second study, also published in Nature Astronomy, a different group of researchers discovered what they call “phantom lakes” on Titan’s surface in the northern hemisphere. These lakes appear in earlier Cassini data and disappear later on. Scientists take this to mean the lakes are shallow, and dry out and disappear as seasons change on Titan. A full seasonal year on Titan is roughly one Saturnian orbit, or 30 Earth years. And since Cassini spent 13 years studying the Saturn system, it had an excellent vantage point to watch the northern hemisphere grow warmer with the onset of summer, while the southern hemisphere descended into winter.

Both studies point to Titan’s complex methane cycle that scientists are still seeking to fully understand. Like Earth’s water cycle, it moves liquids between Titan’s atmosphere, surface, and underground, and changes with seasons and temperatures. It’s the only place other than Earth where scientists can watch this complex cycle of liquid on a planet-wide scale, and they’ll surely keep mining Cassini data until the time comes for Saturn to host a new spacecraft visitor.