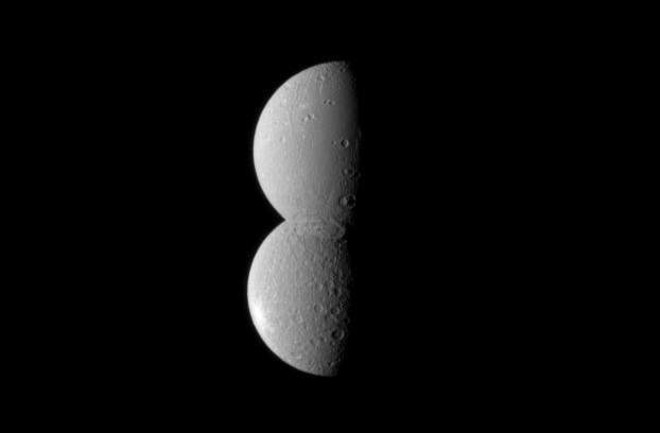 Saturn's moons Dione and Rhea. (Credit: Credit: NASA/JPL/Space Science Institute) Floating out in the solar system, the Cassini spacecraft captured a curious image of two moons that seem to be stuck together.The image actually shows Saturn’s moons Dione and Rhea, but because of the angle that the image was taken at, they appear to be conjoined. Cassini snapped the image before NASA crashed the ship into Saturn last year. The spacecraft took this image 683,508 miles (1.1 million km) away from Dione (top) and 994,193 miles (1.6 million km) away from Rhea (bottom). So, while Rhea, with a diameter of 949 miles (1,528 km), is much larger than Dione, with a diameter of 698 miles (1123 km), they look to be the same size in the image.