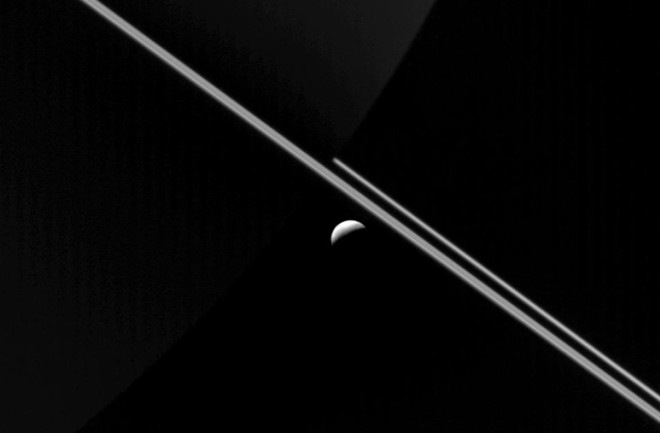 Cassini captured this stunning image of Saturn with its rings and the moon Enceladus from a distance of approximately 87,000 miles on August 18, 2015.(Credit: NASA/JPL-Caltech/Space Science Institute) Though it’s been gone for nearly a year, the Cassini spacecraft continues to fuel new studies of Saturn and its many moons. In particular, Cassini’s unique and close-up view of the system during its Grand Finale orbits produced data that have revealed how plasma waves moving outward from the planet interact with both its rings and its moons. Research based on evaluation of the data was published April 26 and June 7 in Geophysical Research Letters. Now, in a video produced by NASA’s Jet Propulsion Laboratory using the data, you can tune in to the “sounds of Saturn”: the radio emission generated by these plasma waves as they travel along the invisible magnetic field lines linking the planet with its icy moon Enceladus. As it plunged close to the planet during its Grand Finale on September 2, 2017, Cassini’s Radio and Plasma Wave Science (RPWS) instrument picked up electromagnetic waves as it traveled through the Enceladus flux tube — a sort of conduit between the moon and the planet, bounded by magnetic field lines and through which charged particles can flow back and forth. The waves fall in the range of human hearing, and scientists have now amplified them into the audio file below, compressing about 16 minutes’ worth of data down to 28.5 seconds of spooky space sounds. Enceladus is a geologically active world, with plumes containing water, carbon dioxide, salts, and even organic compounds shooting out into space from fissures called “tiger stripes” on its south pole. The moon, which is about as wide as the state of Arizona, sits about 148,000 miles (238,000 kilometers) from Saturn, a little more than half the distance of the moon from Earth. Embedded within the giant planet’s far-reaching magnetic field, “Enceladus is this little generator going around Saturn, and we know it is a continuous source of energy,” said Ali Sulaiman of the University of Iowa, Iowa City, and lead author of the papers, in a press release. “Now we find that Saturn responds by launching signals in the form of plasma waves, through the circuit of magnetic field lines connecting it to Enceladus hundreds of thousands of miles away.” Plasma is the fourth state of matter. Just as matter can exist as a solid, liquid, or gas, it can also exist as a plasma, where the atoms are ionized and have lost their electrons. And it can exist as a soup of positively charged atomic nuclei and free-floating electrons. The new data show that plasma waves and the energy they carry seem to travel back and forth between Saturn and Enceladus along magnetic field lines. What does all this tell us, aside from the fact that Saturn and Enceladus appear to be screeching at each other? The entire Saturn system of planet, rings, and moons, is a unique one in our solar system. It is also extremely dynamic, unlike our own, easier-to-study Earth-moon system. Based on these data, researchers have now shown that Saturn’s magnetic field communicates and interacts with its rings and its moons, and that communication is a two-way line. Learning more about the way they interact will improve researchers’ understanding of not only our own solar system (and, incidentally, one of the most promising places we might find life — Enceladus is a front-runner), but also the planetary systems of other stars, many of which contain Saturn-like planets and, just as likely, rings and moons as well.