By Demolishing a Moon, Saturn May Have Created Its Rings 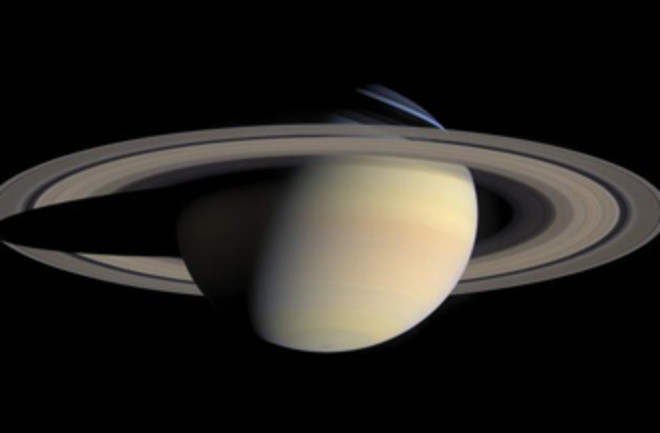 Saturn and its moons may owe their distinctive looks to a legacy of destruction. First, the magnificent rings of the sixth planet: Although astronomers have gazed at the rings for centuries, experts are still debating exactly how these loops formed. Now a new study in the journal Nature proposes that the rings are the leftovers of a large moon that was torn asunder when Saturn's gravity reeled it in four and a half billion years ago. Lead researcher Robin Canup says this theory explains both how the rings got there, and why they're made of nearly solid ice.

In the new study, Canup calculated that a moon the size of Titan — Saturn’s largest at some 5,000 kilometers across — would begin to separate into layers as it migrated inward. Saturn’s tidal pull would cause much of the moon’s ice to melt and then refreeze as an outer mantle. As the moon spiraled into the planet, Canup’s calculations show, the icy layer would be stripped off to form the rings. [Science News]

That layered removal is the key to Canup's explanation, which we covered briefly

when she first presented the idea at a meeting in October. Other explanations for the rings' formation include a comet crashing into a moon, or Saturn pulling in a moon and causing it to shatter all at once. Those events would create a cascade of small objects that Saturn's gravity could have coalesced into rings, but it would seem that they would have created much rockier rings. In reality, Saturn's are 95 percent ice. Canup's moon-obliteration theory also supposes a history of violence by Saturn

against its major moons. Looking at Jupiter today, we see that it has four large moons today to Saturn's one: Titan. If Saturn possessed several large moons in its distant past, then the gas giant could have ripped apart several of them in a chain of creative destruction.

This violent process likely occurred multiple times, with several different Titan-like moons spiraling inward to their deaths. But each subsequent event would have disrupted and destroyed any previous ring system, Canup said, so what we see today are likely the shards of the last big moon Saturn gobbled up. [Space.com]

Iapetus too? If an annihilated moon created Saturn's rings, could something similar explain another weird feature in the vicinity—the ridge around the small Saturnian moon Iapetus that makes it look like a walnut? At an American Geophysical Union meeting

this week, Andrew Dombard will discuss his idea that Iapetus once had its own satellite—a moon of a moon—that it ripped it apart just like Saturn possibly destroyed its large moon. Once that happened, Dombard argues, the storm of debris could have formed a ring around Iapetus, and then built up the 12 mile high, 62 mile wide ridge as the debris pelted the surface.

"Imagine all of these particles coming down horizontally across the equatorial surface at about 400 meters per second, the speed of a rifle bullet, one after the other, like frozen baseballs," says [co-author William] McKinnon. "Particles would impact one by one, over and over again on the equatorial line." [USA Today]

—that during its birth Iapetus cooled unevenly, and when it tried to assume a spherical shape the crust was already frozen, causing this equatorial pileup. Related Content: DISCOVER: Hello, Saturn

DISCOVER: Happy Birthday, Cassini--and Thanks for the Great Images

80beats: Saturn's Rings May Have Birthed Its Small Moons—And More May Be Coming