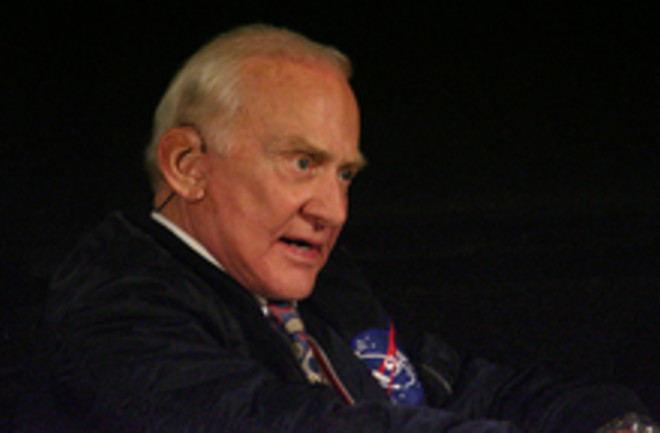 As the second man to ever walk on the moon (he stepped out of the lunar module about 15 minutes after Neil Armstrong), Buzz Aldrin knows a little something about space exploration, about bold ambitions and great risks. Now, Aldrin is speaking out about NASA, and declaring loudly that the space agency has lost its boldness. The next step in humanity's exploration of space must be a bootprint on Mars, he says. Says Aldrin:

"As I approach my 80th birthday, I’m in no mood to keep my mouth shut any longer when I see NASA heading down the wrong path. And that’s exactly what I see today. The ­agency’s current Vision for Space Exploration will waste decades and hundreds of billions of dollars trying to reach the moon by 2020—a glorified rehash of what we did 40 years ago. Instead of a steppingstone to Mars, NASA’s current lunar plan is a detour" [Popular Mechanics].

Aldrin says that while the moon is interesting scientifically, it's not promising for commercial activities. Mars, on the other hand, holds much more potential for a human colony, Aldrin says.

"It’s much more terrestrial. It has a thin atmosphere and a day/night cycle that is very similar to ours. It has seasons. Russia perhaps is still entertaining the possibility that the moons of Mars might have access to ice or water" [The New York Times],

says Aldrin. His comments come at a significant time, as the Obama administration recently ordered a review of NASA's human spaceflight program. Aldrin hopes that the review committee will listen to him and other NASA critics and scrap the Ares rockets currently under development, which are expected to bring the next generation of astronauts into space. It would be cheaper, Aldrin says, to adapt existing satellite-launching rockets to carry a crew capsule, which would allow NASA to spend its time, money, and energy on establishing a Martian outpost. Taking a lesson from the ups and downs of NASA funding over the years, Aldrin says

"we shouldn't be dependent on a program that can be cancelled once we've gone and returned. We need to start something that has a self-sustaining nature. Six people can't get that done. But 40, 50 or 60 can. You need to build a thriving, self-sustaining settlement that doesn't need extensive re-supply from Earth" [The Wall Street Journal].

Aldrin says we ought to send the first settlers to Mars by 2035, which would be 66 years after the first steps were taken on the moon. Related Content: Discoblog: Buzz Aldrin, Rapper? 80beats: NASA Robots Aim for Moon; Human Mission May Be in Doubt 80beats: Obama Orders a Review of NASA's Human Space Flight Program 80beats: NASA May Scrap Plans for a Permanent Moon Base 80beats: New Race to the Moon Could Bring Permanent Bases and Observatories DISCOVER: Russia's Dark Horse Plan to Get to Mars discusses the Phobos plan