Breaking down gender barriers will bring more energy and fresh perspectives into the world of science. Four leading lights discuss how to make it happen. 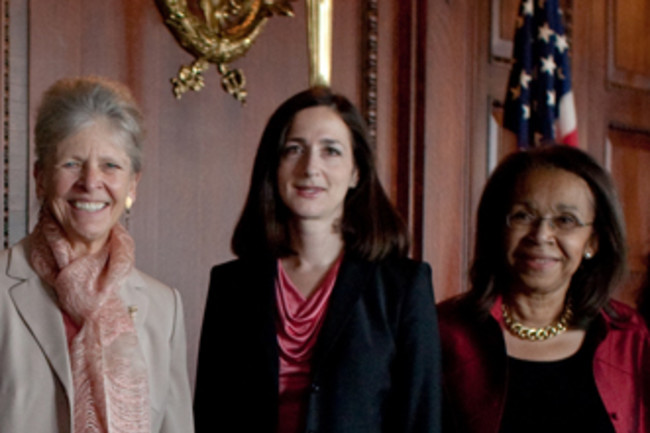 Just a century ago, half the nation’s brainpower was largely excluded from the highest levels of science education. How times change: In 2009 five of the 13 Nobel laureates (including winners in chemistry, medicine, economics, and literature) were women. That same year women earned more than half of all doctoral degrees in the United States for the first time.

Yet some old patterns persist. Women remain substantially underrepresented in many fields, and many encounter discouraging attitudes at every stage from early education to the peak of their careers.

In partnership with L’Oréal USA, and joined by the American Association for the Advancement of Science (AAAS), DISCOVER convened a panel in Washington, D.C., to explore ways to help the research community—and the nation—make the most of its female intellectual firepower. Participating in the conversation were Russlynn Ali, assistant secretary for civil rights at the Department of Education; Joan Steitz, a molecular biophysicist at Yale University who studies RNA; Shirley Malcom, head of the directorate for education and human resources at AAAS; and Sara Seager, a planetary scientist and physicist at MIT who studies the atmospheres of planets beyond the solar system. U.S. Representative Eddie Bernice Johnson provided introductory comments. Sheril Kirshenbaum, who researches public understanding of science at the University of Texas and blogs for DISCOVER at “The Intersection,” moderated.

KIRSHENBAUM What are the lingering challenges for women in science in 2010?

MALCOM Gender still matters with regard to success in science. In a survey of AAAS members, an overwhelming number of women said that they knew of people who had left the sciences because they had trouble integrating their life and their science. I would like to probe how government, industry, academic, nonprofit, and other institutions can help us make better use of women’s talent.

ALI So much progress has been made over the last three decades that folks tend to think we’re done with the work. But we have so far to go. For example, research from Bayer Corporation reveals that 18 percent of female and minority chemists and chemical engineers say professors discouraged them from pursuing a science career. This is about changing belief systems: the way girls feel about themselves and their potential, and the way their educators do as well.

SEAGER This is the 21st century, this is America, and we still don’t have equality for women. This is not just philosophy; it matters for America’s future. When you want to have an educated voter population, it’s not going to be there. At the graduate level at MIT, a lot of my best students are from India, China, and Europe. We’re teaching them about technology and how to be leaders in industry. Some will stay here, but others will take that training back to their home countries instead of putting it to work here. Meanwhile, we are constantly losing women students in the sciences. I want the women in the audience here to ask yourselves, are there times in your life when insecurity limited you or inhibited you from doing something? This lack of confidence actually gets amplified when there are not enough women around.

STEITZ I was appointed to the Yale faculty in 1970. There was one other woman in my department at that time. It was very lonely. Research shows that people who are constantly in the minority suffer from something called “identity threat,” which impairs their ability to contribute to the extent that they otherwise would. And I want to underscore that the things that government does can make a big difference. In the early 1970s, U.S. Secretary of Labor George Shultz told universities that if they didn’t at least have plans for increasing the number of women on their faculties, they might lose their federal grants. Nobody lost their grants, but there was a big increase in the number of women as a result.

KIRSHENBAUM More than half of women surveyed by L’Oréal and AAAS say they have experienced gender bias, and 77 percent encounter barriers to balancing life and career. How can we overcome these challenges?

MALCOM These aren’t just issues for women. They are issues for families and institutions. When Elizabeth Blackburn and Carol Greider were being interviewed after winning the Nobel Prize, they talked about institutional arrangements that provided options for how the science could get done. NOAA administrator Jane Lubchenco has talked about how she and her husband both worked less than full-time at some points during their careers. It is important to have those kinds of options and to share strategies about how those arrangements have been carried out by others.

SEAGER At MIT we have an annual women in engineering symposium. The first question from the audience is always, “Do any of you have children?” Usually half or more of the panelists do. And then people start asking all these questions. Last year one woman almost started crying, because she had never seen a successful woman professor with children. Her professor had said: “You can’t have children. You’ll never succeed.” But those of us who have been through it have ideas that can help others make it work.

KIRSHENBAUM Is there a role for Title IX, the U.S. law that forbids sex discrimination in federally funded education programs? Usually people talk about Title IX with regard to sports, but can it help create opportunities for women in science and engineering?

ALI No recipient of federal funds can have any discriminatory practice, intentional or not, that harms a particular gender. To determine whether institutions are in compliance with the law, the Office for Civil Rights looks at things such as whether women have equal access to advanced course work in high school as well as postsecondary schooling and graduate work. When we determine that discrepancies between men and women result from discriminatory practice, we vigorously enforce the law. We also rely on people on the ground to help make us aware of problems, which is vitally important in telling us how to target our investigatory resources.

KIRSHENBAUM  Where are the biggest discrepancies between men and women in science and technology, and how can we tackle those?

STEITZ  A recent report from the National Research Council tracked what happens to women and men with Ph.D.s as they advance through their careers. At every point along the way, it’s more probable that men will move on to the next step. Where is that coming from? For one thing, when women apply to the nih for grants, their success rate is about equivalent to that of men, but they ask, on average, for 20 percent less money. Men also get more lab space, have better access to equipment at their universities, and have more administrative help. On the bright side, if women have mentors when they write grants, there’s a big leap in their success rate.

SEAGER Women should join a peer support group and find a mentor, because most of us lack access to the old boys’ network that’s naturally helping men most of the time. Whether those mentors are male or female is not as relevant. Find the people who can help you and give you advice at all levels. And be assertive, have confidence, and look out for yourself. Many women tend to put other people first, but that doesn’t work in science. To succeed, when you have a great idea you need to carry it out.

AUDIENCE MEMBER How can institutions make it easier for women to advance in their scientific careers and balance work with family life?

SEAGER Don’t have talks that everyone is supposed to attend right at the end of the day.

MALCOM Offer family leave for graduate and postdoctoral researchers. Set up child-care centers. It’s not just women who need this balance. These are the kinds of solutions that help people of both sexes to manage their dual roles.