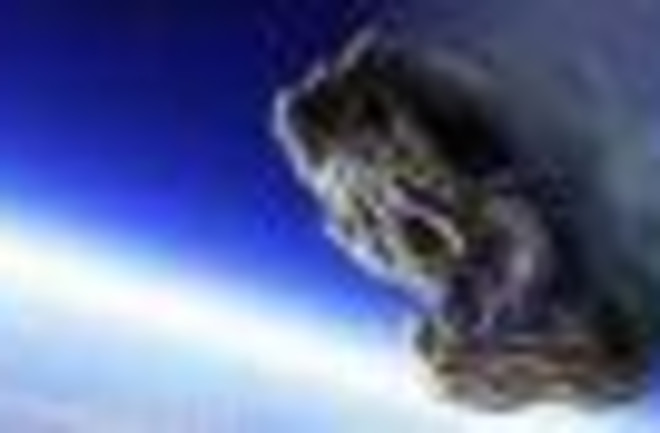 There have been some reports of a possible meteorite in Mexico -- here is one news report translated into English.

[UPDATE (16:00 Mountain Time): A new article is saying this may be a piece of space junk, specifically the remains of a Russian Cosmos 2421 satellite, re-entering. The reports of a crater may be wrong; I heard from someone who knows a reporter in the area (I know, this is uncredited and FOAF so take it with a grain of salt) that no crater has been found. Bear in mind the early report of a crater was totally without any citations at all; no picture, no witnesses, no names, nothing. So it's looking now that it was a bright fireball from space junk, but no actual impact -- but we don't have definitive answers yet. Again, I'll report more as I find it out.]

Reports are a bit sketchy right now, but apparently a bright flaming object was seen coming down about 100 miles northeast of Mexico City on Wednesday around 18:30 local time. There was a roar that was loud enough to shake buildings. Another news article is reporting a crater 30 meters in diameter was found. At the moment this is all I know. It's not clear if this was actually an impact event from a meteorite or some terrestrial event. In 2007 a small meteorite struck in Peru, causing a lot of confusion (with me at least!) over the source of the event; there was a lot of speculation before an actual meteorite impact was confirmed. Before that impact, it was not considered likely that a small meteorite could actually hit the ground fast enough to make a crater in the ten-meter size range (they slow down or break up high in the atmosphere), so the Peru event was a surprise. It's still not completely understood how the meteoroid survived to hit the ground. So it's possible this Mexico event is a meteorite, but we don't know yet. I'll post more information as I find it.