[UPDATE 2: Wesley has put up his video, and it's very cool. The impact is, um, pretty obvious. Bright, too, which makes me think this was a significant object. I'm very surprised at how quickly it brightens and fades, though; I'd expect the flash from the object itself to last a few seconds, and then to see some sort of glowing plume. Perhaps the object itself was a small comet or a loosely packed asteroid -- a so-called "rubble pile " -- which fell apart and vaporized while still high in the atmosphere. I'm guessing, so I'll wait and see what the experts say soon.

[Update (19:00 Mountain time): CONFIRMED! A poster on the Unmanned Space Flight forum reports that another amateur astronomer, Christopher Go (link goes to home page, no news there yet) has confirmed Anthony Wesley's observation and also has video. Though I'm having some trouble playing it, I did see the flash in the video. I think it's safe to call this one real!]

In what turns out to be a major coincidence, Anthony Wesley, an amateur astronomer in Australia, is reporting that he recorded another impact on Jupiter! This time he has video of the impact, which he claims was quite bright and lasted about two seconds. The video is not yet available, but here's a still: 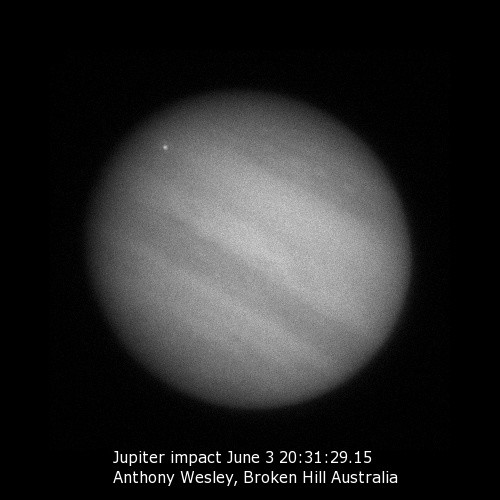 He reports that there is no obvious impact scar as in previous such events. If this pans out, I'm sure Hubble and many other observatories will be in a big hurry to get observations! Infrared images are of particular interest, since they can record the heat from the blast. This really is a funny coincidence, since just this morning the news was released that the 2009 impact -- also discovered by Wesley -- was caused by an asteroid impact. This new event appears to be smaller, since it didn't get as bright as the Shoemaker-Levy 9 impacts in 1994, which were also of the same magnitude as the 2009 event. I've started contacting folks I know to see if anyone has more info on this. Hopefully we'll be getting the big guns involved as soon as possible! Stay tuned. Tip o' the Whipple Shield to Dan Durda for letting me know about this! 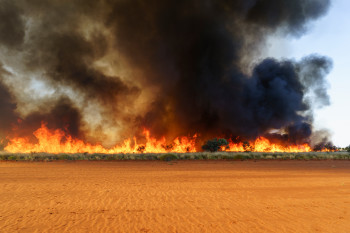