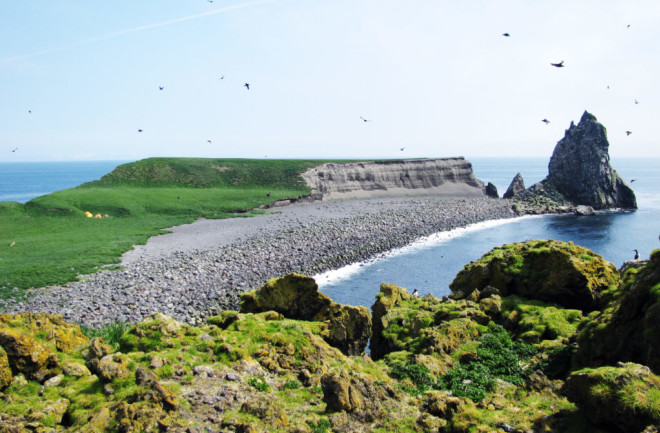 A view of Bogoslof Island in Alaska, with the eroded Castle Rock dome that erupted in 1796.Ann Harding/AVO USGS An unexpected explosive eruption rocked Bogoslof in the Aleutian Islands of Alaska according to the Alaska Volcano Observatory. The eruption was noticed by pilots flying near the remote volcano along with satellite imagery (see below) that revealed an ash plume reaching up 10 kilometers (32,000 feet). However impressive that plume might be, it appears that the eruption didn't last too long, as pilots passing the volcano less than an hour later noted much diminished activity. Update 10:30 am EST on 12/22: Bogoslof had a second big explosive eruption during the night of 12/21. The plume might have been slightly taller than the first explosion, topping out at 10.6 kilometers (35,000 feet). Just like the first eruption, the activity was short-lived, with the explosions ending within 30 minutes. These eruptions have been full of volcanic lightning (see below), which is characteristic of vulcanian eruptions that eject mostly old material in the vent area (Note: after some discussion with folks in the know, these eruptions likely have a lot of interaction with seawater, creating fine ash that is prone to lightning.This Surtseyan style of eruption is a mix of new magma and water to create some of the dramatic explosions). Vulcanian eruptions can be isolated events or the opening salvo of longer periods of activity, so Bogoslof will be very interesting to watch over the next few weeks. The volcano currently sits at Orange/Watch status.

Lots of lightning happening during the #Bogoslof eruption right now in the Alaskan Aleutians @alaska_avo: http://t.co/iq0YFReAfwpic.twitter.com/4vC2VgfFes

Bogoslof on satellite images from 12/20:

Yep, looks like a little poof. Data from Himawari-8 via @UWSSEC in the 7.3um Band (sensitive to SO2) confirms. pic.twitter.com/VPpwrq1XRy

If you look at a map, Bogoslof

doesn't look like much, just a small island in the Bering Sea. However, when you consider the fact that the volcano rises 1,500 meters (~4,900 feet) from the seafloor, you can appreciate that it isn't a tiny feature. The last known eruption of Bogoslof was in 1992

when it produced a VEI 3 eruption and a new dome

. Since 1796, it has produced a half dozen VEI 2-3 explosive events from different vents on the island. A number of small islands have come and gone over the last 400 years as lava domes have formed during eruptions of Bogoslof, only to be eroded or destroyed. Today, only about 300 meters (~1,000 feet) of the volcano sticks above the ocean waters in the form of impressive spires of lava. It will be interesting to see if the new eruption is the start of a new dome-building period at Bogoslof like those that occurred in 1883 and 1796. There is nothing in the way of realtime monitoring (like seismometers) for a volcano like Bogoslof, all alone in the Bering Sea north of Unalaska. Only about 4,300 people live within 100 kilometers (62 miles) of the volcano, but as the reports suggest, there is an awful lot of air traffic that crosses the Aleutian Islands, heading from North America to Asia. The quick notices from the Volcano Ash Advisory Centers (VAAC)

about eruptions like this one from an unexpected source like Bogoslof are vital for air traffic controllers and airlines to change routes and avoid volcanic ash hazards for aircraft. As of the morning of December 21, AVO has Bogoslof on an Orange/Watch status

, lowering it from Red/Warning after no signs of continuing eruptions were seen overnight.