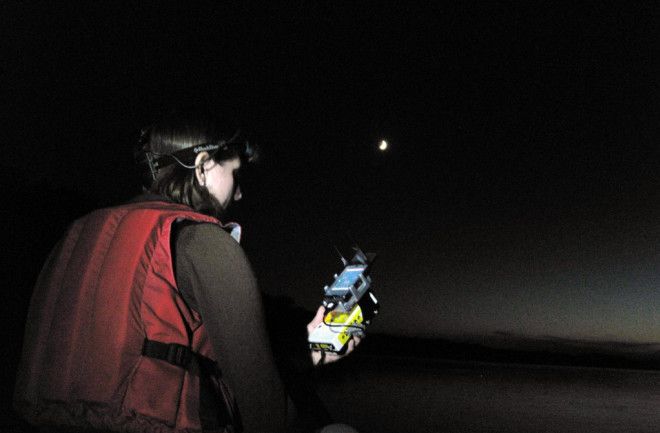 Bat Monitoring on Boats (Image Credit: WDNR, Wisconsin Bat Program) When you think about wildlife you might encounter while boating, fish, turtles, and waterbirds all come to mind. But a growing group of citizen scientists in Wisconsin is using boats to find a whole different type of animal - bats. In parts of the state, bat monitoring by boat, canoe, or kayak has become the go-to method for many volunteers seeking to collect data on these elusive nighttime creatures that play a key role in keeping insect populations in check. These volunteers are part of the Wisconsin Bat Program, a citizen science project run by the Wisconsin Department of Natural Resources. There are three different ways that Wisconsin residents can contribute to our understanding of bat populations across the state. The most involved, and for many the most fun, is to conduct night time acoustic monitoring using special handheld bat detectors. These small devices pick up ultrasonic sounds - the noises that bats use to echolocate and navigate through their environment. Volunteers walk, drive, or boat along survey routes, and the bat detector, which is paired with a GPS device, records the presence of bats in the area. Because different species of bats make different sorts of calls, the species in the area can often be determined even if they are never seen.

Bats roosting (Image Credit: WDNR, Wisconsin Bat Program) Licia Johnson, a naturalist with North Lakeland Discovery Center, coordinates about 30 volunteers who participate in the acoustic monitoring program in far northern Wisconsin’s Vilas County. She says that monitoring by boat is popular with Vilas County volunteers because many of them live on lakes - not an uncommon occurrence in a county with more than 1,300 lakes. According to Johnson, bat monitoring in and around the North Lakeland Discovery Center has been growing steadily since they began coordinating local Wisconsin Bat Program volunteers in 2009. Interest in the program has grown so much that the Discovery Center had to fundraise to purchase a second bat monitoring system to meet the demand of enthusiastic new volunteers. In addition to acoustic monitoring, the program also relies on volunteers to monitor bat roosts statewide. In Wisconsin, two species of bats, little brown bats and big brown bats, form large colonies over the summer where they raise their young. These roosting colonies are often in human-built structures, like barns, silos, or bat houses. When volunteers are aware of a roost, they can monitor it throughout the summer. Roost monitors arrive at a roost about 15 minutes before sunset, often with lawn chairs, to tally the number of bats they see leaving the roost. The third way that members of the public can get involved with bat research is to report sick or dead bats. While this certainly isn’t as fun or uplifting as the other monitoring activities, it is crucial to our understanding of bat populations. The recent spread of White-nose syndrome has left biologists and wildlife enthusiasts greatly troubled. This fungal disease causes many species of insectivorous bats to rouse from their winter hibernation, at a time when there are no insects for them to eat. As a result, it can be lethal. It’s now more important than ever that we carefully track the health and abundance of our bat populations. The acoustic survey, roost monitoring, and sick or dead bat citizen science data collected by Wisconsin Bat Program volunteers is used by the state’s Department of Natural Resources to closely monitor the population. Johnson notes the importance of data for science and conservation, but she also emphasizes another benefit of the program. “Bat monitoring is a fun and interesting way to get the public educated about animals they don’t know much about,” she says. As they learn more about bats, many of the citizen scientists she works with also become more involved in bat conservation by making donations or putting up bat houses. “They’re looking for ways to help more by providing habitat.” This combination of citizen science and habitat support underscores the commitment of the program’s volunteers to protecting these tiny mammals that play a crucial role in our ecosystem.

Eva Lewandowski is the Citizen-based Monitoring Coordinator for the Wisconsin Department of Natural Resources. She has a PhD in Conservation Biology from the University of Minnesota and a passion for all things citizen science.