BMJ Week: Finally, we know why the magazines in your doctor's waiting room are so old. 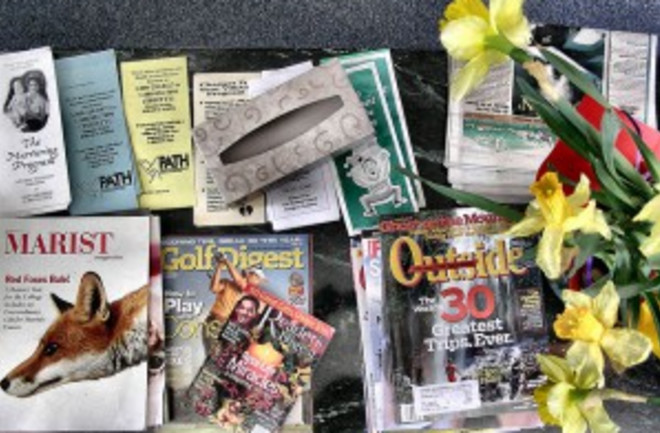 Photo: flickr/striaticIt's that time of year again: the British Medical Journal's Christmas Edition is out, featuring some of the most hilarious research published since... well, since forever! All this week, we will be featuring the best of this and past years' BMJ Christmas research articles to get you in the holiday spirit.In today's gem of a study, the researchers set out to determine why all of the magazines in doctor waiting rooms are old. You might guess that it's just because someone dumped a bunch of magazines on the coffee table back in 2010 and no one has replaced them since. But no -- according to this study, in which the researchers tracked waiting room magazines over the course of a month, the magazines tend to be old because most of the newer magazines actually get stolen! In particular, the authors found that "gossipy" magazines (e.g.People and US) are more likely to get stolen, prompting them to suggest that offices only stock "non-gossipy" magazines if they want to keep their reading material current. Might we humbly suggest Discover Magazine?An exploration of the basis for patient complaints about the oldness of magazines in practice waiting rooms: cohort study "Objective To explore the basis for patient complaints about the oldness of most magazines in practice waiting rooms. Design Cohort study. Setting Waiting room of a general practice in Auckland, New Zealand. Participants 87 magazines stacked into three mixed piles and placed in the waiting room: this included non-gossipy magazines (Time magazine, the Economist, Australian Women’s Weekly, National Geographic, BBC History) and gossipy ones (not identified for fear of litigation). Gossipy was defined as having five or more photographs of celebrities on the front cover and most gossipy as having up to 10 such images. Interventions The magazines were marked with a unique number on the back cover, placed in three piles in the waiting room, and monitored twice weekly. Main outcome measures Disappearance of magazines less than 2 months old versus magazines 3-12 months old, the overall rate of loss of magazines, and the rate of loss of gossipy versus non-gossipy magazines. Results 47 of the 82 magazines with a visible date on the front cover were aged less than 2 months. 28 of these 47 (60%) magazines and 10 of the 35 (29%) older magazines disappeared (P=0.002). After 31 days, 41 of the 87 (47%, 95% confidence interval 37% to 58%) magazines had disappeared. None of the 19 non-gossipy magazines (the Economist and Time magazine) had disappeared compared with 26 of the 27 (96%) gossipy magazines (P<0.001). All 15 of the most gossipy magazines and all 19 of the non-gossipy magazines had disappeared by 31 days. The study was terminated at this point. Conclusions General practice waiting rooms contain mainly old magazines. This phenomenon relates to the disappearance of the magazines rather than to the supply of old ones. Gossipy magazines were more likely to disappear than non-gossipy ones. On the grounds of cost we advise practices to supply old copies of non-gossipy magazines. A waiting room science curriculum is urgently needed." Related content: NCBI ROFL: Who needs a doctor when you have Facebook?Flashback Friday: Finally, a male contraceptive: behold the ball cozy!NCBI ROFL: Finally, a male contraceptive: behold the ball cozy!