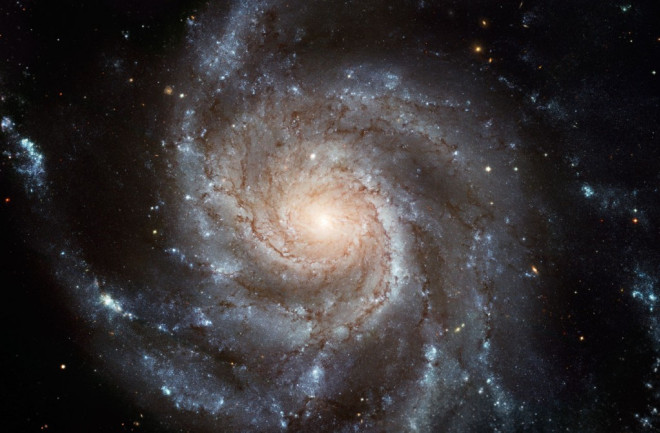 Spiral galaxy M101, home to M101 ULX-1, lies over 20 million light-years away. Credit: NASA, ESA, K. Kuntz (JHU), F. Bresolin (University of Hawaii), J. Trauger (Jet Propulsion Lab), J. Mould (NOAO), Y.-H. Chu (University of Illinois, Urbana), STScI, Canada-France-Hawaii Telescope/ J.-C. Cuillandre/Coelum, G. Jacoby, B. Bohannan, M. Hanna/ NOAO/AURA/NSF Imagine camping in the woods, when you hear what sounds like a chainsaw, but then see that the ruckus is coming from a tiny bird. The experience changes the way you think about little birds, right? And that’s exactly what’s happened to astronomers, who detected what sounded like a black hole behemoth and found, instead, a black hole baby.

Astronomers believe black holes — those reality-warping, light-sucking singular forces of nature — come in three basic varieties. You’ve got your stellar mass black holes, about as massive as our sun; you’ve got intermediate mass black holes (IMBHs), some 100 to 1,000 times the sun’s mass; and you’ve got the immodestly named supermassive black holes, up to billions of times the sun’s mass. So basically, small, medium, and large. Astronomers have a number of ways to tell the different kinds of black holes apart. Larger black holes, for instance, give off low-energy X-rays, and smaller black holes produce high-energy X-rays. (To be clear, it’s not the black hole itself that’s emitting this light, but the rapidly accelerating mass of swirling stuff around it about to get “devoured” by the black hole.) Imagine astronomers’ surprise, then, when a Nature paper came out indicating that a particular star system — with all the hallmarks of an IMBH, including low-energy X-rays, and ultra-bright illumination — is actually a tiny stellar mass black hole.

The researchers who published the astronomy-upending paper used the Gemini telescope to study the light coming from this system, named M101 ULX-1. It's 20 million light-years away in the spiral galaxy M101 (often called the Pinwheel galaxy). Made up of the black hole and a companion star, the system turned out to be relatively free of hydrogen, suggesting the star was of a particular variety known as a Wolf-Rayet. Knowing what kind of star the companion was, the researchers could determine from its light that it was about 19 times as massive as the sun (typical for these rare stars). By further studying the system, the researchers could see how often the star and black hole orbit around each other (once every 8.2 days), and from there it’s just a few routine Newtonian calculations to determine the black hole’s mass. But instead of something hundreds of times the sun’s mass, as astronomers would expect from such a system, they found that this black hole could be a small as 5 solar masses (although their best guess is that it falls somewhere between 20 and 30).

Back to the Drawing Board

Since it was previously thought impossible for such a small star to be as bright and energetic as M101 ULX-1, this finding is changing how astronomers understand these kinds of Ultra Luminous X-ray sources (ULXs). The researchers suggest that perhaps it’s the companion's strong stellar winds (also typical for Wolf-Rayet stars) that are feeding the black hole enough to cause such extreme emissions, but it’s still unknown just how the process could really work. Another big implication for this is that, oh by the way, IMBHs might not even exist. Yes, neat and tidy as it makes things in astronomy, there are no known conclusively identified middle-sized black holes out there. It had been kind of assumed that ULXs, like this one, were almost certainly proof of IMBHs, but this research shows that stellar-mass black holes could be responsible instead. As if black holes weren’t crazy enough already.