Strange metals and black holes have a lot in common, and researchers are exploiting the link to learn more. 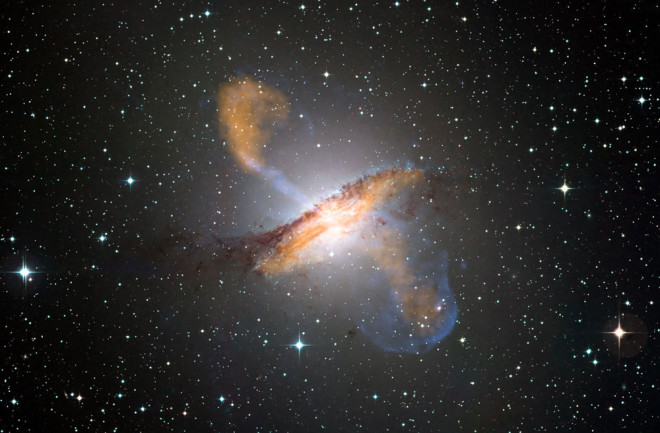 Black holes, like this one in Centaurus A, have a strange connection to materials in earthly labs. | ESO/WFI/MPIfR/APEX/A. Weiss et al. and NASA/CXC/CfA/R. Kraft et al.

It sounds crazy. In recent years, scientists have confirmed a remarkable link between two kinds of objects that should, by all rights, have nothing to do with each other: black holes and strange metals. The former are the famous guzzlers of deep space, able to swallow anything — including stars, planets and even light itself — that gets too close. The latter are closer at hand, though less familiar: the stuff left behind when so-called high-temperature superconductors, materials with no electrical resistance, get too hot to superconduct anymore.

The exact nature of this relationship remains unknown, but at a basic level, it looks like many of the same rules of physics apply to both black holes and strange metals. And scientists on both sides of the connection have already started using it to learn more about their respective fields. It’s such an astonishing discovery that even the man who made it had a hard time believing it.

The person who first came across this unexpected connection, Harvard University physicist Subir Sachdev, is a serious scholar, not prone to flights of whimsy. Born in Delhi, India, and with physics degrees from MIT and Harvard, he was doing postdoctoral work at Bell Labs when scientists first created a high-temperature superconductor in 1986. Previously, scientists had thought superconductors — which could carry electricity essentially forever without sustaining any losses — could exist only in extremely frigid conditions close to absolute zero.

High-temperature superconductors soon became the hot new field, and Sachdev wanted to find his own niche within this booming area. He became curious about one particularly puzzling observation: After these materials are heated above the so-called critical temperature, they lose their superconductivity and assume a different form of matter — strange metals.

Strange metals live up to their name. Perhaps their oddest property relates to the peculiar way in which their electrons behave. In ordinary metals, electrons act like individual particles. In strange metals, however, quantum effects take over, and electrons become “entangled” with each other and can no longer be treated as distinct entities. Electron motions, says Sachdev, “look more like the spread of molasses than pointlike objects traveling in a straight line.” Strange indeed.

In 1992, Sachdev and his graduate student Jinwu Ye used that weird quality to build a simplified model of strange metals. They found they could capture the essential features of these complicated materials, containing vast numbers of interacting electrons, with just a single rule: Electrons can move randomly from one atom to another within a given sample, but they can only move in pairs. The model showed that electrical resistance in strange metals should vary with temperature — a reassuring result, given that other scientists’ experiments had already verified it. But Sachdev still had no idea how important his humble model would eventually become.

A couple of years later, Sachdev and colleagues Antoine Georges and Olivier Parcollet were surprised to find that their model suggested strange metals had a fantastically high entropy — a measure of the number of possible ways particles can arrange themselves. The computed entropy was so high, it almost defied the laws of physics, implying that strange metals were far more complicated than originally supposed.

This was an early hint of the mysterious ties between strange metals and black holes, which were also known to have staggeringly high entropies. But it took many more years for Sachdev to recognize those parallels.

That journey started in earnest when he heard about the counterintuitive notion that black hole theories might apply to other phenomena in different settings. Theoretical physicists Dam Thanh Son and Andrei Starinets, for example, collaborated on an idea that used black hole math to predict the viscosity of an ultrahot gas, or plasma, that forms in certain particle collider experiments. Perhaps some of those same principles might work for strange metals, Sachdev thought.

A magnet floats on the magnetic field of a superconductive material, the precursor state of the appropriately named strange metals. | Julien Bobroff, Frederic Bouquet and Jeffrey Quilliam/LPS, Orsay, France via Wikimedia

He soon hit pay dirt. A 2007 Physical Review B paper that Stanford University physicist Sean Hartnoll co-wrote with Sachdev and others noted some uncanny similarities between strange metals and black holes. Besides the aforementioned high entropy, the two objects had the same “characteristic time,” which relates to how long a system takes to reach a resting, or equilibrium, state after being violently disturbed. In 2010, Sachdev discovered an even deeper connection: His model of strange metals also worked for black holes.

This was shocking. Somehow, the behavior of fleetingly paired-up electrons in the model of an odd material produced on Earth bears some resemblance to the cosmic weirdness of a black hole. The model depicted a strange metal when looked at one way and a black hole when viewed through a different lens. Caltech physicist Alexei Kitaev refined things further in 2014, and the resultant Sachdev-Ye-Kitaev (SYK) model has been mystifying researchers ever since, while affording them new avenues for exploration.

Other physicists started paying attention. Before the SYK model, there wasn’t such an easy and convenient way to study black holes. Researchers suddenly had many more options at their disposal, according to physicist Douglas Stanford of the Institute for Advanced Study in Princeton, N.J. “You can analyze things about a black hole you couldn’t any other way, like the time evolution of the system,” he says. Stanford is now relying on SYK to learn more about a black hole’s interior, while Kitaev is pursuing the question of what happens to the information carried by objects that fall into a black hole.

Insights from black holes, meanwhile, have already given Sachdev and his colleagues some answers. Among other things, they can now better predict the behavior of electrons in graphene, a flat sheet of carbon just a single atom thick, which acts like a strange metal under certain conditions. This superthin, 2-D material — incredibly strong, flexible and light — could have diverse applications in areas that include biomedical devices and consumer tech. Specific predictions were upheld in 2015 experiments at Harvard showing how graphene conducts heat and electricity. The data helped show how graphene and its near-miraculous properties could one day come out of the lab, while further affirming the validity of the SYK model. We could be on the brink of a new era in technology, thanks in part to the model.

Sachdev definitely anticipates some practical payoffs down the road. “SYK should advance our understanding of strange metals, which can, in turn, guide the development of high-temperature superconductors and help us pick the best ingredients for these materials,” he says.

The crazy link between strange metals and black holes, which even Sachdev didn’t take seriously at first, is finally bearing fruit. So why did it take him so long to exploit the connection he now considers obvious? “I wasn’t smart enough,” he confesses — though the evidence suggests otherwise.