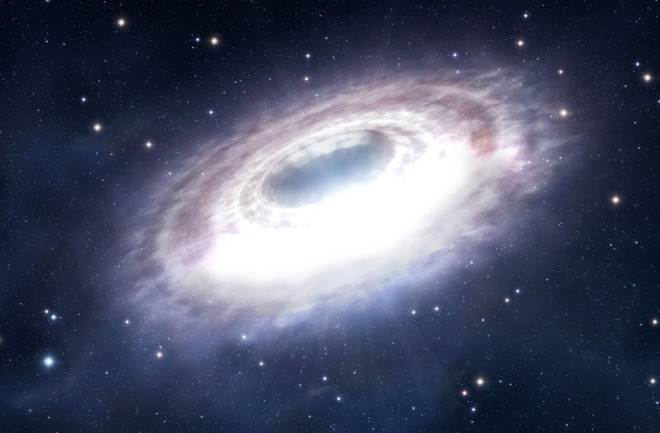 Supermassive black hole Sagittarius A* depicted with G2 gas cloud. Image courtesy of L. Calçada/ESO What's the most highly anticipated cinematic event of the summer? For astronomers, that's easy: The spectacle of a gas cloud hurtling toward a black hole, right in our cosmic backyard. At the center of our galaxy lies a supermassive black hole by the name of Sagittarius A* (and yes, the * is actually part of its name). With an extraordinary mass of four million suns, this black hole wields a hefty gravitational pull, which it's using to rip apart a gas cloud many times the size of our planet. The epic tug-of-war between black hole and matter will be the first astronomers have ever been able to observe, and since it's right here in the Milky Way, they've got front-row seats. The action is just getting started. The prey in the black hole's sights is a gas cloud known as G2, which was first identified in 2011. As the black hole's gravity draws the gas cloud closer, it spins and stretches the gas cloud like silly putty. The gases are speeding up and heating up as G2 gets closer. And recent analysis of observations from the Very Large Telescope show that the front end of the cloud has finally reached its closest approach to the black hole.

A composite image showing the movement of the gas cloud - in 2006 (blue), 2010 (green) and 2013 (red) - toward the black hole. Image courtesy of S. Gillessen/ESO Surprisingly, however, the cloud hasn't yet begun to be engulfed, but its current proximity means it's being closely watched. ESO scientists report that, having just barely brushed by Sagittarius A*'s gravitational trap, the head of the G2 cloud is now shooting back toward us at a speed of 10,000,000 km/h---an impressive one percent the speed of light. Astronomers at the Max Planck Institute for Extraterrestrial Physics will use these and future findings to narrow down the possible origins of the gas cloud. Since this is the first time we've gotten to see a gas cloud swallowed by a black hole, the results will allow scientists to study the mysterious forces behind black holes' super-strong gravity. It'll take a year for the rest of the stretched-out gas cloud to make its dangerous journey around the black hole's gravitational trap---so stay tuned to see how it fares.