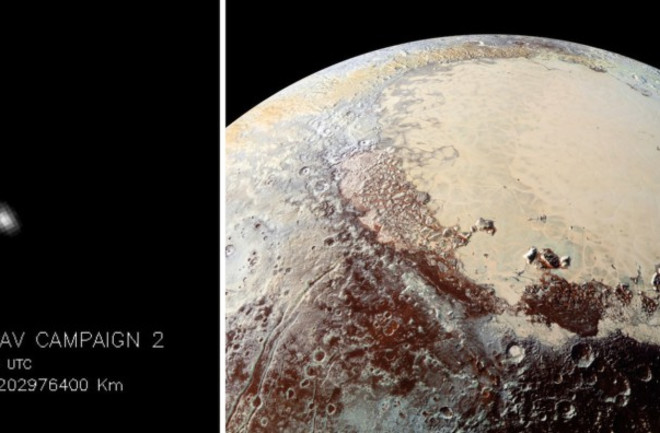 Before and after: Pluto as seen by the New Horizons spacecraft in January and July of 2015. (Credit: NASA/JHUAPL/SwRI) What was the biggest news in astronomy this past year? The editorial board of Discover has helpfully provided an answer, one that I heartily endorse (and not only because I wrote the related story in the magazine): It was the exploration of Pluto by the New Horizons spacecraft. To appreciate just why that mission was, and still is, such a big deal, join me in a little act of mental time travel. If you could move 6 months back in time, it would be shockingly simple to summarize what astronomers knew about Pluto--and mind you, they knew more about Pluto than about any of the other myriad frozen worlds out beyond Neptune. The Idiot's Guide to Pluto would not include an exact diameter (nobody knew it), or structure of the atmosphere, the geology, the topography, the composition, or even Pluto's distinctive markings (nobody knew any of those, either). You could say, with no disrespect, that even the most dedicated planetary scientists were pretty much Pluto idiots back then. Put a more respectful way, the most casual reader of science headlines today knows more about Pluto than the world's greatest Pluto expert did 6 months ago. That is all because of New Horizons, and the consequences have been a revelation. I wrote about the astonishing initial results from the Pluto flyby, as reported just days after it happened. But New Horizons is the gift that just keeps giving. It collected a vast amount of data as it swooped past Pluto, and has been slowly, slowly trickling the results back ever since, limited by the transmission rate of its antenna. One of the biggest surprises of the past few months is the structure of Pluto's atmosphere. The air out there is extremely thin, with a surface pressure about 1/100,000th that of Earth's. The naive assumption (the Idiot's Guide to Pluto version) would be that such a thin atmosphere must be quite simple, a nearly invisible wisp of gas above the surface. New Horizons revealed a vastly different truth.

Fifteen minutes after closest encounter on July 14, New Horizons looked back at a haze-cloaked twilight landscape on Pluto. You definitely want to click & enlarge this one. (Credit: NASA/JHUAPL/SwRI) Looking back at Pluto, the probe saw an atmosphere laced with haze, thick enough to break up the twilight and to trace evening shadows from the two-mile-high ice mountains. And the haze itself--oh wow, what unexpected beauty and complexity. It is divided into at least a dozen layers, their structure still only partially understood. Apparently the weather on Pluto changes from day to day, with nitrogen (and perhaps methane and carbon monoxide) circulating from surface to air and back again, akin to the hydrological cycle on Earth. If the haze was a surprise, Pluto's surface features were a full-on revelation. The Idiot's Guide vision of Pluto anticipated some dynamic interaction between the atmosphere and the ground, but nothing like this. Almost immediately, mission scientists noticed what appeared to be nitrogen glaciers sliding down craggy mountains of water ice. Since then, the story has turned even more exciting and strange. A large portion of Pluto (the broad region provisionally known as Sputnik Planum, the left side of its "heart") is covered with a sea of ices. And I really do mean a sea. This exotic mix of frozen gases--nitrogen, methane, and carbon monoxide, undoubtedly with more complex organics mixed in--exists at a temperature very close to the "triple point," the temperature at which solid, liquid, and gaseous forms can co-exist. The result is that the ices on Pluto have the consistency of toothpaste, according to New Horizons researcher Orkan Umurhan.

The dynamic ices of Pluto: flowing, churning, and evaporating on a timescale of a decade or so, like a very sluggish ocean. (Credit: NASA/JHUAPL/SwRI) No wonder there are so few craters. The whole area is a a squishy, sluggish ocean of frozen gases. If that sentence sounds odd, that is because Pluto is odd, unlike any world humans have explored before. As a general rule of thumb, hot places are more active than cold ones. Hot volcanoes are more active than old, cool mountains; hotspring are more active than cool lakes, and so on. The rule does not apply at all by the time you get out to Pluto. Mercury, the planet closest to the sun, is cratered and geologically dormant. Pluto, 100 times as far from solar warmth, is dynamic and alive. The latest New Horizons images show vaguely hexagonal ripples, perhaps from the circulating of those soft ices, and widespread pitting, most likely due to the direct evaporation of parts of the solid-ish surface (a process known as sublimation). On an ice world like Pluto, minuscule energy inputs are enough to trigger huge effects. Solar heat can't budge silicon rock on Mercury, but it sure can move around frozen nitrogen on Pluto. Add this to the new Idiot's Guide to Pluto--and to the many other large frozen bodies of the solar system: Nature has a knack for coming up with ways to make worlds active, even when the surface temperature hovers around -390 degrees Fahrenheit.

A full swath of Pluto, showing colorful organics, water ice, and a huge range of topography. (Credit: NASA/JHUAPL/SwRI/Roman Tkachenko) What other surprises does Pluto have in store? New Horizons has still radioed back less than half of its dataset. The biggest astronomy news of 2015 will continue to be big news in 2016. And with each new transmission, we will realize--with glee--what idiots we were just a few days ago.