Behold! The Birth of Stellar Triplets 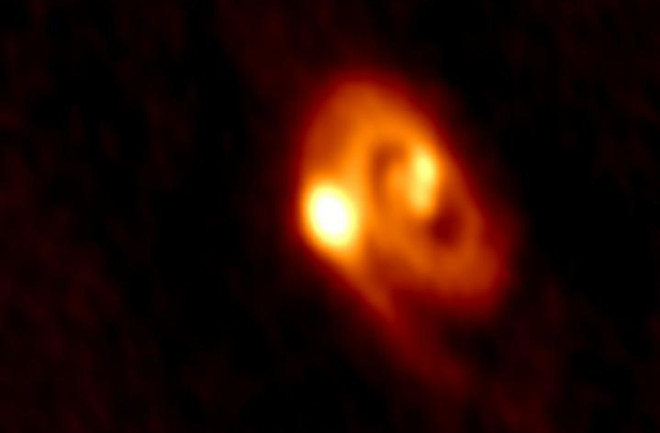 ALMA captured the image of the triple-star system and the disk of material around the stars and the spiral arms. This region of stellar birth is about five times the size of our solar system. (Credit: University of Oklahoma and ALMA) Using the Atacama Large Millimeter/submillimeter Array (ALMA), astronomers have captured a stunningly clear, and rare image of stellar triplets still in their infancy. The three stars are just babies: They’re still bundled in a primordial cloud of gas and dust, and are thought to be no more than 150,000 years old. The sun, by comparison, is some 4.5 billion years old — middle aged by cosmic timescales. Obtaining such a clear image of this young star trio is providing astronomers with new insights into how multi-star systems come into existence. The fledgling protostar system, called L1448 IRS3B, isn’t new to astronomers, but they haven’t seen it quite like this before. The new view from ALMA is twice the resolution and nearly 10 times the sensitivity of previous attempts to image the system. As a result of better images, astronomers could actually observe the spiral structure of the gas cloud surrounding the stars, and that was important. Stars form when gas and dust collapse gravitationally to form dense cores inside protostellar clouds. These cores continue to suck in more material, and as it falls inward the remaining material forms a rotating disk around the star. Eventually, the star sucks in enough mass to yield temperature and pressures that are high enough to trigger thermonuclear reactions. But roughly half the sun-like stars in our galaxy have a companion, and astronomers think those stellar siblings are the result of gravitational disturbances in the protostellar cloud — what's called disk fragmentation. And if there’s enough gas and dust in the disturbed cloud, additional stars can form.

Artist's conception of how the triple-star system develops. Left, disk of material fragments into separate protostars. Right, the resulting stellar system. (Credit: Bill Saxton, NRAO/AUI/NSF) This was a pretty good theory, but because astronomers can now actually see the spiral shape of the gas cloud and analyze the stars in L1448 IRS3B, it serves as clear evidence that multi-star systems form through this process of disk fragmentation. Astronomers published their results Wednesday in the journal Nature. "What is important is that we discovered that companion stars can form in disk material surrounding a dominant star," John Tobin, a University of Oklahoma astronomer and study author, said in a news release. Tobin and his team will continue hunting for more of these triple-star systems, and they plan to image this particularly youthful system in further detail using ALMA.