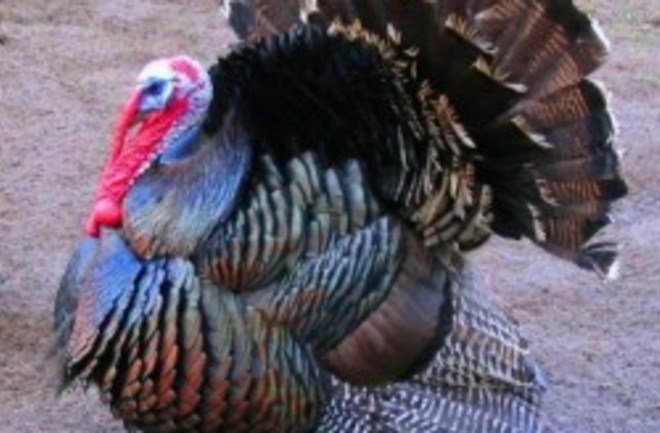 Hubba hubba—just look at the snood on this boy! He doesn't have stellar genes, though—he just knows how to use them. Photo via Wikimedia user Lupin. In all species, some males are simply better looking than others. They have the right shape, dance, color or attitude to make the ladies of their species swoon. It's generally assumed that good looks come from one thing: good genes. Win the genetic lottery and you're set. Get a bum hand from mom and dad and, well, you can always try to mate again next year. In turkeys, male come in one of two varieties: dominant and sexy or subordinate and, well, kind of plain. The dominant males have all the things female turkeys want like lots of bright, red flesh over their beaks. The subordinate males don't stand a chance with the females, but that doesn't mean they stand around and do nothing. They actually help get their more attractive brothers laid, thus helping pass along their genes through kin selection. There was just one thing that didn't sit right with scientists: how can closely related male turkeys—brothers that share 50% of their DNA—look so different? How can one be drop dead gorgeous while the other is nothing to gobble at? It had to be more than just good genes, decided University College London's Judith Mank. She and her colleagues compared gene expression between related male turkeys, and found it wasn't the DNA that mattered—it's how they used it. Dominant males had high expression levels of "masculine" genes—those predominantly expressed in males—and lower expression levels of genes expressed highly in females. The subordinate males, on the other hand, had a more feminine expression pattern. Exactly what causes this shift in expression patterns is unknown, though researchers believe it may be related to hormone levels. This makes sense, given that over time, dominance hierarchies in turkeys can shift and a male that once were subordinate can take the position of power if an opportunity arises (like when the previous top bird finds himself stuffed for Thanksgiving). These males go from drab to fab very quickly. When it comes to turkeys, becoming the best looking in the bunch is simply a matter of flipping the right genetic switch. It's hard to resist the temptation to extrapolate these results to our own species. It's certainly possible that expression levels of different genes also play a role in shaping human beauty—after all, scientists have found that men prefer women with exaggerated feminine characteristics and women, in turn, prefer masculinized men when they're fertile, for example. That said, attractiveness in humans is a complex trait. Our judgments of beauty can change based on our own moods and hormones, let alone amorphous factors like personality and charm. And, of course, a certain amount is based on genetic luck. So it's unlikely that shifts in gene expression explain our range of attractiveness. Citation: Pointer MA, Harrison PW, Wright AE, Mank JE (2013) Masculinization of Gene Expression Is Associated with Exaggeration of Male Sexual Dimorphism. PLoS Genet 9(8): e1003697.