Battlestar Galactica And The United Nations 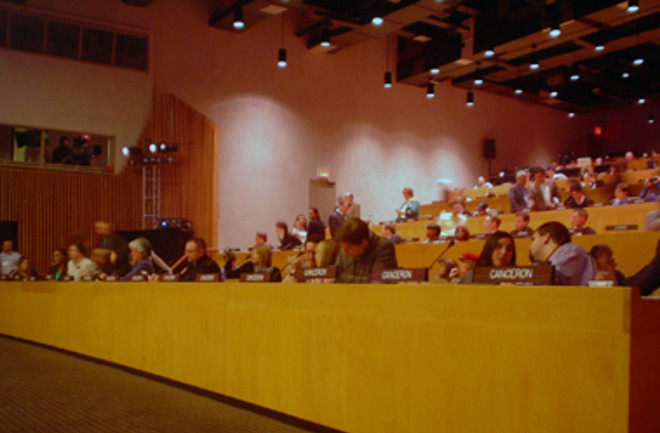 As the series finale approaches this Friday, yesterday the Battlestar Galactica caravan found it's way to the United Nations for a high-powered discussion of human rights, the impact of armed conflict upon children, terrorism, and reconciliation. Moderated by Whoopi Goldberg, who confessed to being a such a big fan of BSG that's she started saying "Frak" on The View, the event was held in the UN's Economic and Social Council Chamber. In a nice touch, the placards that normally held the boring old names of countries like "The United States" or "Japan" were replaced with the names of the twelve colonies (I became a "Gemenon" delegate for the evening.) The placards may be auctioned off for charity later, and if that happens we'll let you know where you can go to bid. Many of the attendees were high school students brought in under the auspices of the Sci Fi/SyFy channel's Visions For Tomorrow project. The entire event took over two hours, so I won't try to recap the whole thing here, but speakers such as Craig Mokhiber, Deputy Director of the New York Office of the High Commissioner for Human Rights, praised the show for rejecting the idea that national (or species) security is incompatible with human rights; illustrating how societies dehumanize people to make it easier to attack those people; and for not allowing viewers to come to easy answers about the morality of what happened on screen. On the BSG side, co-creators David Eick and Ron Moore were present along with Mary McDonnell (who plays the role of President Roslin), but it was Edward James Olmos, (Admiral Adama) who stole the show with his impassioned comments about BSG and the dialogue about real-world issues it has sparked over the course of its run -- two examples:

We’re talking about a science fiction show, we’re talking about the humanity we live in today. I still find it incredible that we still use word “race” as a cultural determinant... I detest what we’ve done to ourselves. Out of a need to make ourselves different from one another, we’ve made the word “race” a way of expressing culture. There’s no such thing—and all you high school students, bless your hearts for being here. You’re a hundred champions right now that are going to go out understanding this. The adults in the room will never understand, even though they’ll nod their heads and say “you’re right.” They’ll never be able to stop using the word "race" as a cultural determinant. I just heard one of the most prolific statements done by one of the great humanitarians, he’s really trying to organize and bring us together, and he used the word “race” as if there is a Latino race, an Asian race, an indigenous race, a Caucasian race. There’s no such thing as a Latino race. There never has been. There never will be. There’s only one race, and that’s what the show brought out. That is the human race, period. The question becomes, why did we start to use race a cultural determinant? The truth is that over six hundred years ago, the “Caucasian race” decided to use it as cultural determinant so it would be easier for them to kill another culture. That was the total understanding. To kill one culture from another culture. You couldn’t kill your own race. So you had to make them the other. And to this day, I spent 37 years of my adult life trying to get this word out, and now I am well prepared as the Admiral of the Battlestar Galactica to say to all of you: there is but one race. That is it! So say we all! [audience responds "So say we all"] So say we all! [audience bellows "So say we all!"] SO SAY WE ALL! [yelling and cheering]

At the end of the evening, Olmos was asked what should people take away from BSG:

The show is an incredible journey, at the end of which you have been taken on a tremendous ride. And in that ride you learned, and you’ve given to it 84 hours of your life. That’s an extraordinary commitment to those who have done it. Hopefully on your death bed you'll look back on your life and not think that you wasted your time. ... I want to personally thank [Famatta Rose Osode, Deputy Permanent Representative of Liberia to the United Nations who spoke about the challenges of reconciliation, and admitted she wasn't familiar with BSG] for taking the time. I mean really, you had no idea what you were getting into... I know that you’re very busy and the last thing you have to do here is talk about a television show. Yet the most important thing I’ve ever done in the art form is this program. It’s allowed everyone in this room to think about [the problems that concern the UN]. ...[We] talk about dialogue. What made this show incredible was the fact that the writers wrote an incredible story, guided by Ron Moore and David Eick. They created something that they gave to the production designer, the costume designer, the camera department, the actors, the director, who took it to a level that surprised the writer, that augmented the material. Then we gave all these elements to post production. And post production took it to an extraordinary higher level ... Then we put it on the air. Then the advent of technology...took hold. The entire planet started to blog these guys...and all the writers started to write and listen to these bloggings and started to comment on the bloggings. The bloggers took it to a level that was immensely further than we had ever intended... then the writers went back to the drawing board for the second season, and took all of what they’d learnt from the first season and threw it in there with the augmentation of what happened with the blogging. And then the process started again.... pretty soon it was a direct line between all of us... Television had never been done like this.

Don't forget to check back in with Science Not Fiction after the finale airs on Friday -- we'll have comments from Eick and Moore about the show's backstory, and an interview with science advisor, Kevin Grazier.

The Scientific Reason Singers Have a Knack for Language