Baby Pictures of the Cosmos, Now in HD

A new map of the universe's earliest moments shows its fiery start and suggests an icy ending. 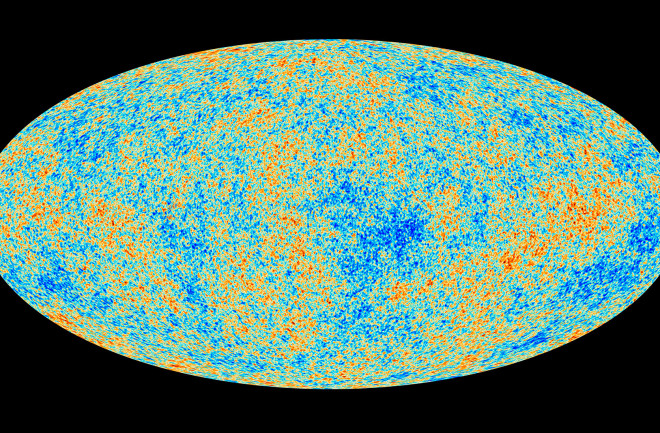 Cosmologists have long had a fuzzy view of the newborn universe and its basic components. But in March, the European Space Agency announced that its orbiting Planck telescope had taken the temperature of 50 million tiny patches of sky, creating the highest-resolution baby picture of the whole universe ever taken, and allowing astronomers to better understand the first moments after the Big Bang.

The Planck telescope observes light waves that date back to just 380,000 years after the Big Bang, when the universe had cooled enough for stable atoms to form, and light could finally escape the fog of free-floating particles as microwaves.

Today this light, called the cosmic microwave background, or CMB, fills the sky with an almost uniform glow — almost, because some pockets of the sky are a few millionths of a degree warmer or colder than average. These spots show where matter first began to clump together, eventually accreting into the galaxies we see today.

The average temperature of the CMB’s light tells scientists how much the universe has cooled as it has expanded — the cooler it is, the bigger it has grown and the more time has passed since the Big Bang began that expansion. The Planck telescope’s observations formed a CMB map, revealing with its ultra-precise data that the universe is 40 million years older than previously thought.

The data also reveal that dark energy, the repulsive force that causes the universe to expand faster, makes up 68.3 percent of the cosmos; dark matter, the invisible scaffolding that keeps galaxies and other structures together, makes up 26.8 percent. Regular matter makes up the remaining 4.9 percent.

Planck’s percentages indicate that dark energy will always outmuscle the combined forces of dark and regular matter, pulling the cosmos apart ever faster. Eventually, the gas that fuels new star formation will run out, and no new stars will form. And then, the cosmos will go cold and dark, likely ending in a “Big Freeze” — a grim reflection of its fiery birth.

[This article originally appeared in print as "Baby Pictures of the Cosmos – in HD."]