Alan Friedman's photos are no stranger to this blog; I've posteda lot of his amazing pictures of the Sun (See Related Posts, below). So many, in fact, that one needs to be surpassingly cool to add to the lineup. So, yeah: 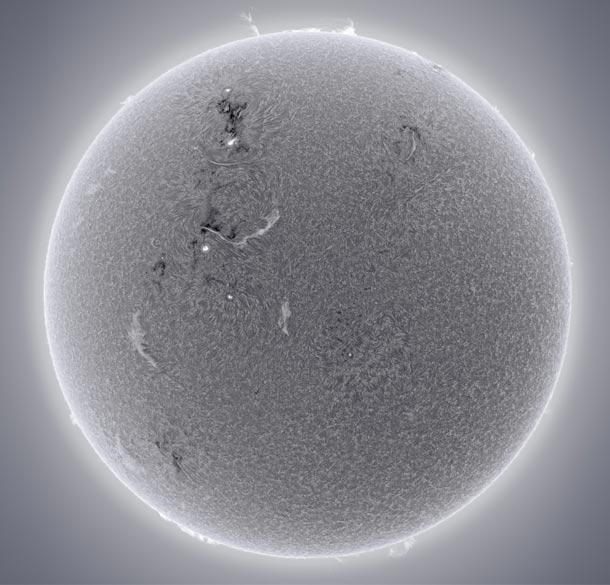 [Click to ensolarnate.] Yegads. He took this on July 29, 2012. Because the image is inverted - dark things appear bright, and vice-versa - sunspots are intense white patches, bright plages appear dark, and towering filaments are whitish-gray. Note how the Sun's face gets darker toward the center and brighter toward the edge - meaning in reality the center is bright and the edge dimmer. This is called limb-darkening (the opposite of limb-brightening seen in some gas clouds), and occurs because gas around the Sun absorbs its light. We look through more of it near the edge than toward the center, so there's less light coming from the limb of the Sun. I'll note that only the face of the Sun is inverted, though. Everything outside that is normal, so the leaping prominences of gas on the edge are bright, as they should be. That might be a bit confusing, but it does make for a dramatic picture. And given how volatile our local star, you don't have to go very far to get drama out of it.

Related Posts: - Ho hum, another GORGEOUS pic of the Sun - Close-up of a solar monster - No words - Towering transit of Venus