Astronomers Watch As A Black Hole's Jet Wobbles Like a Top 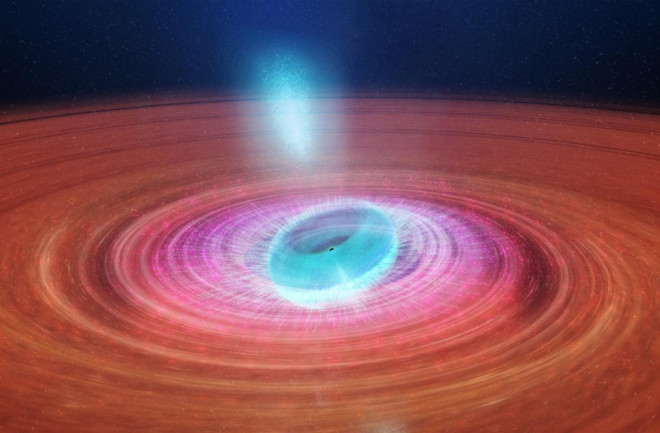 This illustration shows how astronomers think V404 Cygni's black hole is tilted from the disk of material around it, causing its jets to wobble around in space. (Credit: ICRAR) Back in 2015, the black hole V404 Cygni got the attention of astronomers all over the globe when it suddenly brightened for two weeks. The outburst happened as the black hole began gobbling up material from a star that orbits it once every six days. As the material swirled into the black hole, it heated up enough to glow brightly. Then, the black hole starting shooting some of that material far out into space as bright jet beams. When astronomers took a close look at the jets, they realized they were wobbling like a top. Normally, when astronomers see jets spewing from a black hole, the features are oriented in one direction. But in this case, the black hole’s spin is offset from the disk of material swirling around it. And thanks to relativity, the black hole is also dragging space-time around it, warping the disk. This misalignment makes the jets trace out a cone shape in space, creating a unique signature that astronomers are eager to understand and watch evolve in real time.

Astronomers first noticed V404 Cygni during a different outburst in 1989. And once they identified the object as a black hole some 8,000 light-years away, they were able to look back at older photographs of the same area and find that it had also outburst in 1938 and 1956. The black hole itself is surrounded by a pancake-shaped cloud of debris called an accretion disk more than 6 million miles wide, made of material that it's stripping from that nearby companion star. Scientists would expect the material around the black hole to spin the same way the black hole does. But something – probably a kick from the supernova that first formed V404 Cygni – pushed the black hole and the disk out of alignment. During its most recent outburst in 2015, this misalignment was visible in the tilting of the jets, which wobbled around even as astronomers watched, changing in just minutes to hours. Researchers led by James Miller-Jones, from the International Center for Radio Astronomy Research in Australia, published their observations of the black hole and its wobbling jets April 29 in Nature. “The inner part of the accretion disk was precessing and effectively pulling the jets around with it,” Miller-Jones said in a statement. “You can think of it like the wobble of a spinning top as it slows down – only in this case, the wobble is caused by Einstein’s theory of general relativity.” Normally, astronomers would view an object like V404 Cygni with hours of combined data. But because of the jets’ wobble, this gave the researchers a blurred image. Instead, Miller-Jones and his team took multiple, shorter-exposure images to create a choppy movie of the jets’ movements. The dragging of space-time caused by V404 Cygni’s spin is expected in situations like this, but getting a clear picture of it happening on timescales short enough to observe is a special treat for astronomers. It’s likely that V404 Cygni will outburst again in the next few decades, and astronomers will surely be waiting with their cameras at the ready. [embed]https://vimeo.com/332194313[/embed]