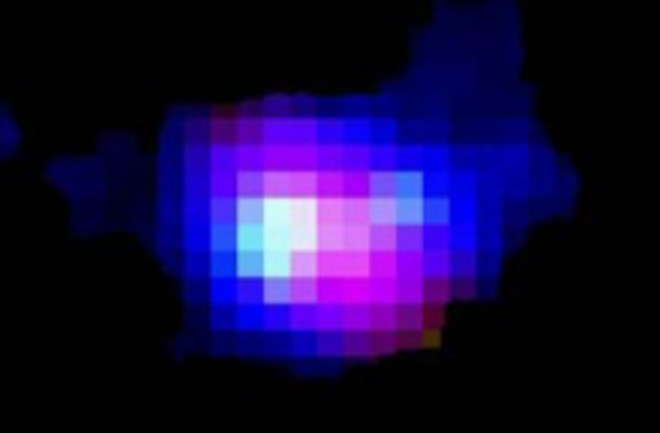 When the universe was young, it somehow produced a giant space blob that has astronomers completely puzzled. Researchers have caught sight of an enormous patch of hot hydrogen gas officially

known as a Lyman-alpha blob, named for a particular wavelength of light released when an electron loses energy in a hydrogen atom. It spans some 55,000 light years, about half the width of the Milky Way, and it sits some 12.9 billion light years from Earth. That means we are seeing it as it was 12.9 billion years ago, when the universe was just 800 million years old [New Scientist].

The blob poses a cosmological conundrum because astronomers didn't think such a big cloud could form so early in the history of the universe. Current models

hold that between 200 million and one billion years after the Big Bang, the first colossal stars formed, emitting radiation that stripped light elements of their electrons and turned the Universe into a soup of charged particles. Only after this "re-ionisation epoch" did matter as we now know it really start to clump together [BBC News].

Astronomers thought that objects as big as the newly discovered blob would take a great deal of time to gradually grow from the mergers of smaller chunks of matter. The blob has been named "Himiko" after a legendary Japanese queen. But now that astronomers have discovered and named the gas cloud, they have to get down to figuring out what it is. As researchers describe in their study, published in the Astrophysical Journal, the blob could conceal a

galaxy lit either by a ravenous supermassive black hole at its centre or by the heat of an intense burst of star formation. But it could also be two merging galaxies, or a developing galaxy that is gobbling up a large amount of gas [New Scientist].

Regardless of what the blob may turn out to be, its size means that researchers don't yet know everything about the behavior of matter in the universe's early days, says study coauthor Masami Ouchi.

"There are two possibilities: the standard scenario of galaxy formation is wrong, or this particular object is showing something unique" [BBC News]

, he says. Related Content: 80beats: Just After the Big Bang, a Star Factory Went Gangbusters 80beats: Scientists May Have Detected the Death Throes of the Universe’s First Stars 80beats: The First Stars Started Small, Grew Fast, and Died Young DISCOVER: The Man Who Made Stars and Planets DISCOVER: In the Nursery of the Stars Image: M Ouichi et al