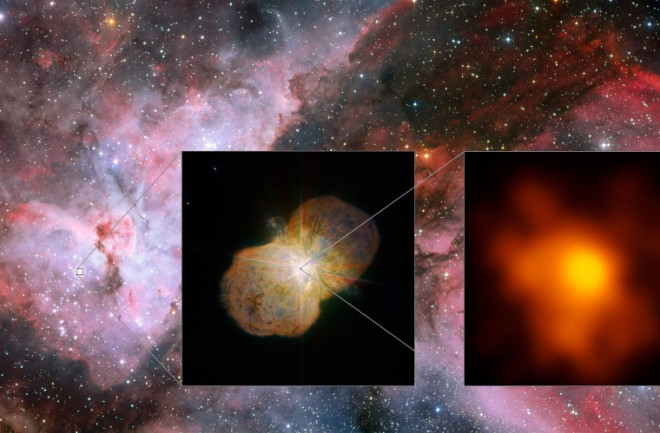 An international team of astronomers have used the Very Large Telescope Interferometer to image the Eta Carinae star system in the greatest detail ever achieved. They found new and unexpected structures within the binary system, including in the area between the two stars where extremely high velocity stellar winds are colliding. These new insights into this enigmatic star system could lead to a better understanding of the evolution of very massive stars. (Credit: Gerd Weigelt?ESO) This is what it’s like when stellar winds collide. An international team of researchers from the Max Planck Institute for Radioastronomy has captured the sharpest, clearest image of the Eta Carinae star system. Here, some 7,500 light-years away, two massive stars orbit each other while producing stellar winds that reach velocities over 6 million miles per hour. In the space between the two stars in this binary system, the opposing winds violently collide. Until now, astronomers couldn’t see what was happening at the point of impact, but the Max Planck team cleverly used the European Southern Observatory’s Very Large Telescope Interferometer to image Eta Carinae in unprecedented detail and obtain a first glimpse of this exceedingly turbulent corner of the universe. And by peering into the chaos, astronomers are learning more about the life cycle of massive stars.

It wasn’t until 2005 that astronomers confirmed Eta Carinae was a binary system, and it’s still difficult to learn what’s going on here. Immense amounts of gas and dust ejected from the larger star of the pair, during an event observed in the 19th-century, obscures our view. But a computer-aided workaround, called interferometry, helped bring this intriguing system into focus. Here’s how interferometry works: Astronomers combined the power of three of four telescopes that are part of the VLTI to build a clearer image of the system. Each telescope absorbed infrared light and provided a slightly different baseline of observational data. Then, powerful computers combined these baselines like a puzzle to assemble a more precise picture. It’s an imaging technique that’s used to see more without relying on larger, more expensive mirrors. In this case, the technique allowed astronomers to clearly see a fan-shaped structure where stellar winds from the smaller, hotter star smash into the denser winds from the larger star. Here, temperatures reach tens of millions of degrees, which is hot enough to emit X-ray radiation. With a high-resolution view of Eta Carinae, astronomers could also gauge the velocities of these winds, which will yield more accurate computer models of this intriguing system. “Our dreams came true, because we can now get extremely sharp images in the infrared. The VLTI provides us with a unique opportunity to improve our physical understanding of Eta Carinae and many other key objects,” said Gerd Weigelt, the lead author of the paper published Wednesday in Astronomy & Astrophysics, in a news release.