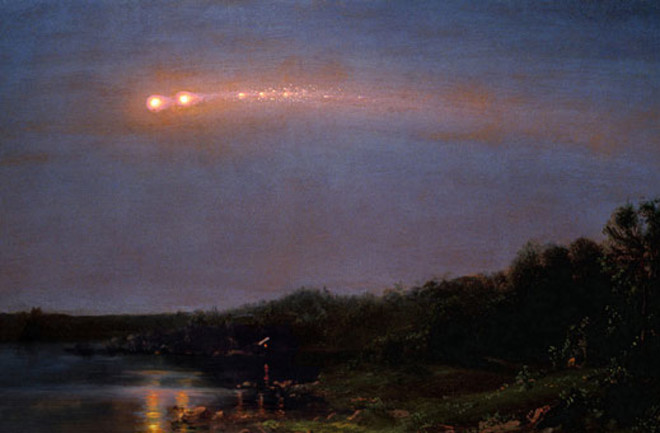 , but it's not everyday that astronomers set out to uncover a poet's muse. Researchers believe they have found the astronomical inspiration for the "strange huge meteor procession" in the poem "Year of Meteors. (1859-60.)" published in Walt Whitman's Leaves of Grass. The investigators have determined that Whitman was waxing poetic about a rare event called an Earth-grazing meteor procession. An Earth-grazing meteor never hits our planet; as its name implies, it just visits, slicing through our atmosphere on its path. On this voyage, pieces of the meteor crumble off and head generally in the same direction (the "procession"), burning as they go and making a show to awe and inspire. Texas State physics professors Donald Olson and Russell Doescher, English professor Marilynn Olson, and student Ava Pope have discounted previous suspects for the poem's inspiration: an 1833 Leonid meteor storm, the 1858 Leonids, and a fireball in 1859. The dates are wrong for the first two and the fireball happened during the day whereas Whitman described a night event. Instead, they found the answer in another creative work, a Fredric Church painting "The Meteor of 1860" that looked like the scene Whitman's poem portrays. With some more sleuthing, they discovered that the painting described a meteor procession that occurred on July, 20, 1860, and found reports from newspapers describing an event sounding very similar to Whitman's poem and Church's painting. As reported in a Texas State University press release:

"From all the observations in towns up and down the Hudson River Valley, we're able to determine the meteor's appearance down to the hour and minute," Olson said. "Church observed it at 9:49 p.m. when the meteor passed overhead, and Walt Whitman would've seen it at the same time, give or take one minute."

This is not the first time Donald Olson has investigated the inspiration for a piece art using astronomy. Using similar detective work he believes he has also tracked down astronomical underpinnings in the works of Ansel Adams and Edvard Munch. Related Content: 80beats: Solar Sleuthing Suggests When Odysseus Got Home: April 16, 1178 B.C. 80beats: The DNA of Medieval Manuscripts May Reveal Their History