Astronomers Find the Youngest Known Pulsar in the Milky Way 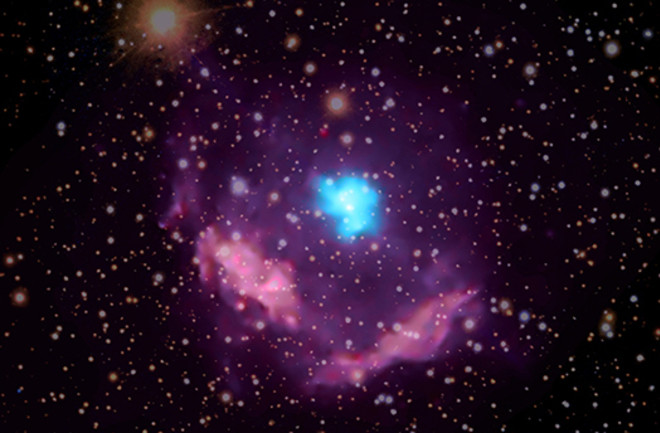 This composite image of Kes 75, the youngest known pulsar in the Milky Way, includes data from Chandra and the Sloan Digital Sky Survey. The blue region represents the high-energy X-rays surrounding the pulsar, showing an area called the pulsar wind nebula, and the purple region shows lower-energy X-rays, emitted by debris left over from the original supernova explosion. (Credit: NASA/CXC/NCSU/S. Reynolds; Optical: PanSTARRS) Thanks to data from NASA’s Chandra X-ray Observatory, a team of astronomers has successfully confirmed the Milky Way’s youngest known pulsar. The mission has studied the supernova remnant for over 15 years and has collected invaluable information about its rapid expansion, physical properties, and surrounding environment. This new discovery could provide key information about the death of stars.

When a massive star collapses in on itself and explodes in a supernova, it leaves behind a tiny, incredibly dense neutron star. This highly magnetized, rapidly spinning star emits a bright beam of radiation that’s sometimes in the sightline of Earth. When it is, we’re able to see the beam “pulse” as it passes by. More than 2,000 of these pulsars have been detected since they were first discovered in 1967, but many aspects of them, like the stars they were born from and how they evolve, still remain a mystery. But luckily, Chandra is helping shed light on their peculiar properties. A team of astronomers from North Carolina State University recently used Chandra data from 2000, 2006, 2009, and 2016 to study Kes 75, a pulsar just 19,000 light-years from Earth. Their results also appear in The Astrophysical Journal. They found that, as the highly magnetized neutron star rotates rapidly, Kes 75 generates a pulsar wind nebulae — a bubble of particles that are energized in the wind of matter and antimatter flowing outward from the star at nearly the speed of light. Shown in blue in the photo above, this nebula is expanding at a rate of two million miles (3.2 million kilometers) per hour. Based on this expansion rate, the team was able to trace its birth back to just 500 Earth-years ago — making it the youngest known pulsar in the Milky Way. (In this case, “birth” refers to when the light from the supernova explosion would have been spotted on Earth, after traveling for 19,000 years.)

Since it’s expanding so rapidly, the astronomers think that the pulsar lives in an easily penetrable, low-density environment. They suggest that this lower-density bubble is primarily made up of radioactive nickel that was formed and ejected during the supernova explosion. This nickel could be responsible for the supernova’s luminosity, too, since nickel releases visible light as it decays into iron gas. If true, astronomers would have an idea of the elements that made up the host star before it exploded. Despite its rapid expansion, the pulsar wind nebula’s total brightness has decreased by about 10 percent since 2000, with some regions dimming by about 30 percent. And thanks to years of detailed observations, researchers can begin to understand Kes 75’s strange actions and evolution, and gain insight into the curious nature of pulsars. [This article originally appeared on Astronomy.com]