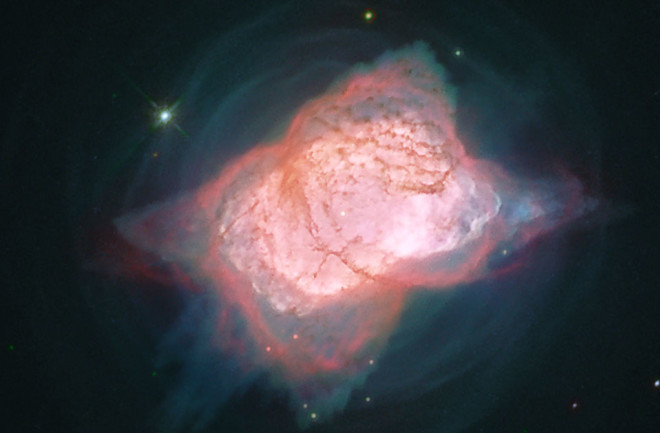 The planetary nebula NCG 7027, where astronomers have found their first evidence of helium hydride in space. (Credit: Hubble/NASA/ESA/Judy Schmidt)

Everything has a beginning. That’s true for stories, for people, for the universe and even for chemistry. The Big Bang itself produced just a handful of elements (variations of hydrogen, helium and lithium nuclei), so researchers have a pretty good sense of what the first atoms and molecules might have been. But the very first molecular bond to form, linking together atoms of different elements in a single molecule, has long been missing in action.

Known as a helium hydride ion (HeH^+), this conglomeration of basic bits is just a helium atom and a hydrogen’s nucleus (aka a proton) stuck together. As the first compound created in the universe, you’d expect there to be traces of it throughout the universe — but astronomers couldn’t find it. (Scientists managed to produce some in the lab in 1925, so at least they knew it wasn’t an impossible substance.)

However, just as researchers wondered if they might’ve gotten things wrong about the early universe (or basic chemistry), fortune smiled on them: A paper today in Nature describes the first unequivocal discovery of the HeH^+ molecule in space. It took precise instruments and a flying observatory to do it, but now chemists and cosmologists alike can breathe easy — and push their research in new directions.

Ever since the 1970s, astronomers had been looking for HeH^+ molecules in the hazy collections of gas and dust known as nebulas. Some in particular, called planetary nebulas, could mimic conditions in the early universe, so they became the biggest targets. But for decades, astronomers found nothing. (Well, nothing definite, at least; some helium hydride findings came in, but they all remained unconfirmed.)

Part of the problem was that the kind of light the molecule gives off is easily absorbed by Earth’s atmosphere. The very air around most observatories was blocking out the molecule's signature. So to get a good look, scientists had to literally rise above all that. Most observatories are built high up on mountains, for lots of reasons, but even that wasn’t good enough for this search.

Instead, astronomers turned to the Stratospheric Observatory for Infrared Astronomy, or just SOFIA, which is literally an observatory aboard a plane. They took their telescope above all that blocking air, and finally saw clear and unambiguous emissions of the HeH^+ ion, coming from a planetary nebula named NGC 7027, 2900 light-years from Earth.

The finding opens a window into the behavior of planetary nebulas, and into this specific molecule (which formed differently in the distant past than in NGC 7027). Plus, it gives researchers better numbers to help them form more accurate theories and models. But mostly, this is a symbolic victory, confirming some of the most basic things we think we know about the early universe, some 14 billion years ago.

As the study’s authors put it: “The chemistry of the Universe began with this ion. The lack of definitive evidence for its very existence in interstellar space has been a dilemma for astronomy. The unambiguous detection reported here brings a decades-long search to a happy ending at last.”