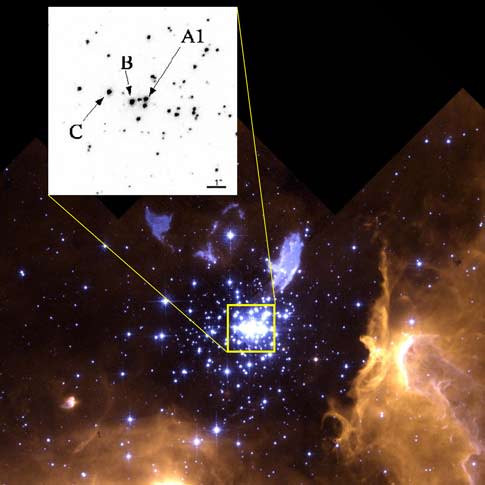 This is really cool -- astronomers using the Very Large Telescope (yes, I know the name sucks) in Chile and Hubble have discovered the most massive star ever found... and it's a bruiser, weighing in at 114 times the mass of the Sun. This blows away the previously most massive known star, which had a mere 83 solar masses. Cripes. That's a whopping huge star. It's labeled "A1" in the image above. They were able to reliably determine its mass because it's in a binary system, orbiting another star (actually, they orbit each other). The orbital period is -- get this -- 3.77 days! By carefully observing the Doppler shift of the stars' spectra, they were able to find out not only the velocities of the stars' motions in their mutual orbit, but also other orbital parameters (the ellipticity of the orbit, its period, and so on). These in turn can give you the mass. Usually, the tilt of the orbit messes things up. If you observe it face-on, then you get different numbers than you do if it's edge on. In other words, without knowing the tilt you can't really know the mass. However, it was found that this system is an eclipsing binary: every orbit, the stars pass directly in front or behind each other from our view. That's prefect! You can only get such a system if it is edge-on or nearly so. That constrains the tilt severely, and makes the masses easier to determine. So in this case, we can be pretty confident of the mass of 114 times the Sun's. I'll add that the companion star is no slouch, either: it has 84 solar masses! I don't know the error bars on these masses, so I can't say for sure that even the companion star would have broken the old record. It very well might have. 114 solar masses is getting close to the limit on how massive a star can get. More massive stars fuse elements in their core far, far more quickly than lower mass stars. That generates mind-numbing amounts of energy, making the star incredibly luminous. At some point, the star gets so massive and so bright that to a particle sitting on the surface, the force of gravity down toward the star is offset by the force of radiation pressure (literally a pressure exerted by light itself) up, away from the star. The star literally is too bright, and launches its outer surface into space. This is called the Eddington limit, after the astronomer who first figured it out. The actual upper limit is hard to determine, even theoretically. It can depend on many things, such as how fast the star spins, and what elements are in it -- oddly enough, the presence of the element manganese lowers the mass limit because it is very effective at absorbing visible light, which tends to make it more susceptible to radiation pressure. That's the kind of incredibly detailed stuff that makes these calculations very tricky indeed. In the image above, by the way, the star marked "C" is also a binary and thought to be another biggun, but the masses have not been reliably determined yet. I keep thinking about this system: a pair of 114 and 84 solar mass stars, so close together they orbit one another in less than 4 days. They must be elongated stars; the centrifugal force would be ferocious, I'd wager, and the upper layers of those stars are barely holding on due to the Eddington limit. Unfortunately, no paper was linked in the press release I received, so I can't go into too much detail without it being pure speculation. Are the stars blowing off a vast wind of material? Are they emitting gamma rays, like the scary massive binary in the cluster Westerlund 2? How long before these stars explode (and man, when they eventually explode, they'll explode)? I wish I knew! I'll have to keep my eyes open for the paper. Stuff like this is thrilling, just to know such an exotic and terrifying beast can exist. I have to add this... the binary star is at the center of NGC 3603, one of my all time favorite nebulae. Check the banner at the top of this page to confirm this. :-) In fact, I have a whole page about the logo and the nebula. See those weird bluish rings around the bright star above the center of the press release image? The star is Sher 25, another crazy giant in that nebula that'll blow up one day, and the rings look suspiciously like the rings I studied around a different star for my PhD. I considered observing Sher 25 with Hubble a few years back, until I realized it would take about 20 orbits of data -- that's a lot -- and probably a year out of my life to reduce the observations and convert them into usable data. I decided not to go for it. Even now, I wonder if I should've tried. It would have been very cool. Oh well. I love what I'm doing now. I get to write about stuff like this, and that sure is fun too!