Astronomers Find an Exoplanet Where Iron Rains From the Sky

The extreme orbit of the gas giant exoplanet WASP-76 b gives it some truly terrifying weather. 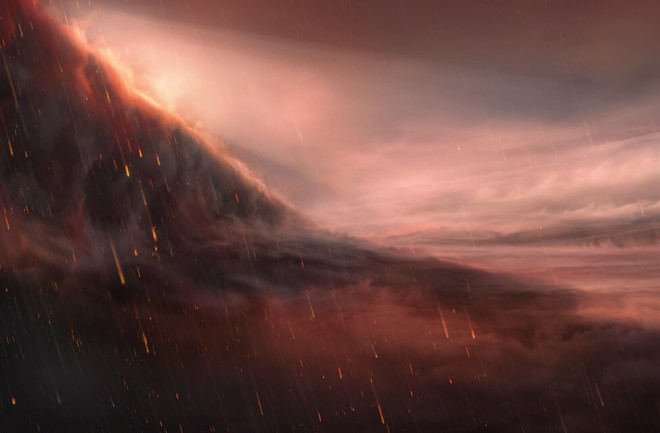 Astronomers have discovered a bizarre exoplanet that rains iron at night. The daytime side of this world, dubbed WASP-76 b, isn’t any less hellish, either. Temperatures can reach up to 4,300 degrees Fahrenheit (2,400 degrees Celsius) — hot enough to vaporize metal.

“One could say that this planet gets rainy in the evening, except it rains iron,” University of Geneva astronomer David Ehrenreich, who led the new study, said in a press release.

WASP-76 b is slightly smaller than Jupiter and sits some 640 light-years from Earth in the constellation Pisces. Its horrifying weather is caused by its truly extreme orbit. Gas giant worlds like WASP-76 b are called hot Jupiters because they orbit uncomfortably close to their home stars — in this case, nearly 10 times closer than Mercury is to our sun.

That proximity leaves WASP-76 b “tidally locked” to its star, with one side permanently baking in light and the other stuck in eternal darkness.

WASP-76 b’s daytime side gets hit with thousands of times more radiation than Earth receives from the sun. And this scorching radiation vaporizes iron on the dayside. Winds driven by extreme temperature differences then push the metal around the planet to the nighttime hemisphere. There, drastically cooler temperatures let the iron condense into drops and fall as a strange rain.

“Surprisingly, however, we don’t see iron vapor on the other side of the planet in the morning,” University of Geneva researcher Christophe Lovis said in a media release. “The conclusion is that the iron has condensed during the night. In other words, it rains iron on the night side of this extreme exoplanet.”

It’s the first time astronomers have detected this kind of day-to-night chemical difference on a hot Jupiter like WASP-76 b.

Researchers found the planet using the European Southern Observatory’s Very Large Telescope (VLT) in Chile. Specifically, the discovery was made possible thanks to an instrument called the Echelle SPectrograph for Rocky Exoplanets and Stable Spectroscopic Observations (ESPRESSO). Astronomers originally planned to use this VLT instrument to study Earth-like planets around stars like our sun. However, they suspected that the VLT’s extreme size would be perfect for studying the atmospheres of other exoplanets. It turns out they were right.

Their discovery of iron rain on WASP-76 b was made during ESPRESSO’s first-ever science observations. And that means there’s likely many more bizarre worlds out there just waiting to be revealed.

“What we have now is a whole new way to trace the climate of the most extreme exoplanets,” Ehrenreich said.