Astronomers Find A 'Fossil Cloud' Uncontaminated Since the Big Bang 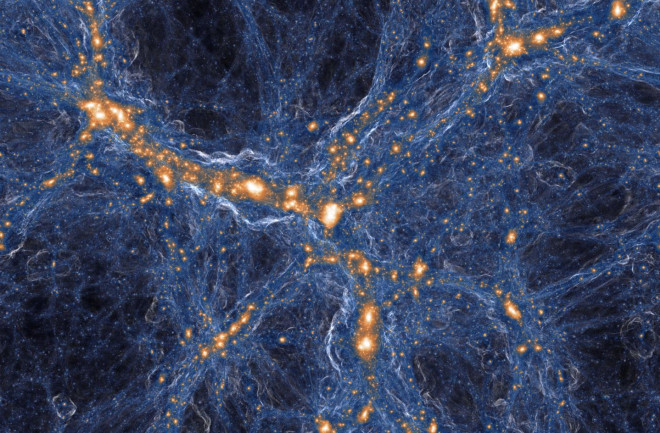 A simulation of galaxies (orange) and gas (blue) in the universe. There are rare pockets of gas left over from the Big Bang that have remained unpolluted by material from exploding stars. (Credit: TNG COLLABORATION)

Astronomers have discovered an ancient remnant of the Big Bang with some of the world’s most powerful telescopes. This scrap of pure material from the universe’s beginning could help researchers to better understand how and why different types of stars and galaxies formed in the early universe.

A group of astronomers, led by Fred Robert and Michael Murphy of the Swinburne University of Technology in Australia used telescopes at the W. M. Keck Obervatory in Hawaii to find a cloud of gas left over from the Big Bang lurking far out in the universe. The telescope also found a quasar — an ultra-bright active galactic nucleus emitting lots of energy — lurking behind the cloud.

This cloud is a remarkable find because has changed remarkably little since its creation. “Everywhere we look, the gas in the universe is polluted by waste heavy elements from exploding stars. But this particular cloud seems pristine, unpolluted by stars even 1.5 billion years after the Big Bang,” Robert said in a statement. “If it has any heavy elements at all, it must be less than 1/10,000th of the proportion we see in our Sun. This is extremely low; the most compelling explanation is that it’s a true relic of the Big Bang,” he added.

Because the quasar behind the ancient cloud is so bright, it illuminates the material in it. This illumination allowed the researchers to see the spectral shadows of the hydrogen in the gas cloud, and because it hasn’t been contaminated, it’s a look at what the cloud looked like billions of years ago.

This is not the first cloud remnant from the Big Bang ever discovered. In 2011, researchers discovered two other “fossil clouds.”

“The first two were serendipitous discoveries, and we thought they were the tip of the iceberg. But no one has discovered anything similar – they are clearly very rare and difficult to see. It’s fantastic to finally discover one systematically,” astronomer John O’Meara, who discovered the first two fossil clouds along with colleagues, added in the statement.

“It’s now possible to survey for these fossil relics of the Big Bang,” Murphy said in the statement. Studying these ancient clouds gives scientists a better idea of what the universe was like at the time of the Big Bang — potentially explaining how and why some gases in the early universe became certain stars and galaxies and others didn’t.

This work is set to be published in the journal Monthly Notices of the Royal Astronomical Society. An electronic preprint of the work is available on the preprint server arXiv.