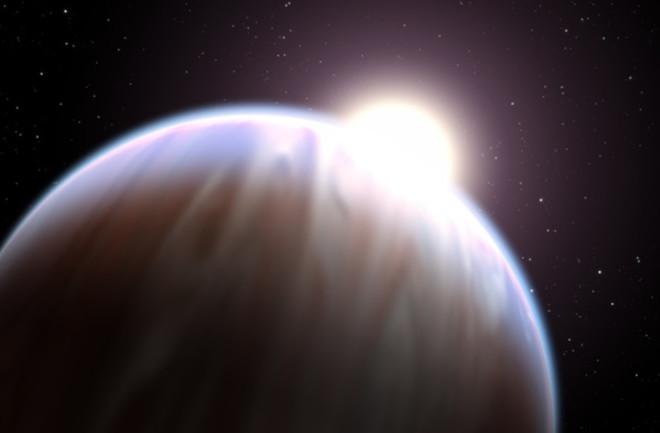 An artist’s illustration of an exoplanet orbiting a hot star. Few planets have been found to orbit hot main-sequence A stars, but a recent discovery illustrates a new way to find such planets orbiting further out in the stars’ habitable zones. (NASA, ESA, and G. Bacon (STScI) Astronomers find most exoplanets from indirect signals, noticing changes in the light of the planet’s host star instead of by seeing the planet itself. But some stars’ light changes all on its own, making these methods tricky at best. KIC 7917485b is the first exoplanet identified around a main sequence A-type star from its orbital motion, and the first found near an A -typestar’s habitable zone. A-type stars are bigger and hotter than most stars in the Kepler catalog and tend to be noisy, changing brightness at regular intervals. This dimming and brightening can be hard to untangle from, for instance, a planet transiting and dimming its light. As such, while there’s no reason for A-type stars not to have planets, it’s been difficult for astronomers to identify them. So far, the few exoplanets found around A-type stars are either from direct imaging (which can only, where the planets are very far from their star, or from transits where the planets are very close to the star, where the signal is strong. But astronomers came up with a novel idea to use the variability of the star itself as a way to look for exoplanets. The star pulses because of helium changes in its lower layers. It puffs up, cools and dims, shrinks, heats and brightens, and then repeats the process multiple times in a day. In a Kepler light curve, this shows up as a periodic dimming and brightening, like clockwork. But this clock shows a delay. The pulsations appear a little early or late, and by calculating this delay, astronomers can measure that the star is actually moving in a back-and-forth, orbital motion. And this movement is due to the gravitational tug of a nearby planet. The delays in KIC 7917485’s pulsations revealed a planet about 12 Jupiter masses with a period of 840 days, which is close to the habitable zone of such a hot star. While 12 Jupiter masses makes this planet nearly a brown dwarf, and certainly a gas giant, the study’s authors point out that potential moons keep the question of habitability an intriguing one. The pulsation delays are very similar to how astronomers find planets via the radial velocity method, but in this case, no spectrometer is needed. The Kepler light curve provides all the necessary information; the planet doesn’t need to transit to reveal itself. This is key, because most planets on orbits that take hundreds of days— planets in the habitable zone of hot stars — won’t. Having a method that can reveal them anyway is an important tool in the exoplanet-finding kit.