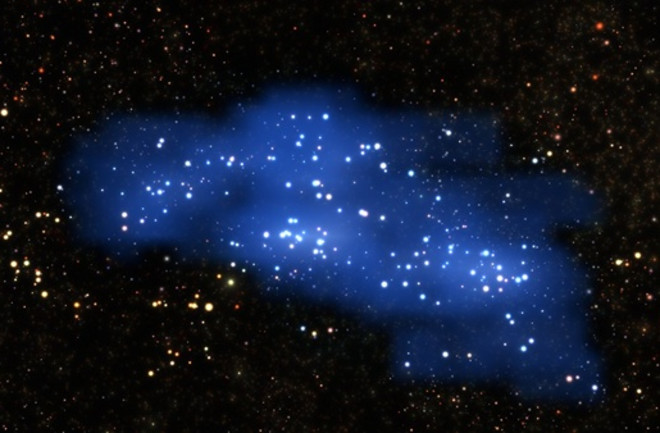 Because they take time to assemble, most superclusters are found nearby, rather than at great distances — which would mean they’re older. But a team of astronomers using the European Southern Observatory’s Very Large Telescope has just announced the discovery of the largest, most massive proto-supercluster discovered to date, already forming just 2.3 billion years after the Big Bang.

The team discovered the “titanic” proto-supercluster, nicknamed Hyperion after a Titan in Green mythology, in the constellation Sextans the Sextant using a combination of new observations and archival data. It contains one million billion solar masses — 1015 Suns’ worth of material. Its structure is both complex and unique, showing different characteristics than older superclusters in the local universe.

Local superclusters have most of their mass concentrated at their centers, but Hyperion’s mass is more spread out. The proto-supercluster appears to contain at least seven separate regions of higher density bridged by filaments of galaxies, showing us a glimpse of the early stages of supercluster formation. Over time, the team says, those separate regions will likely come together to form the more centralized structures seen today.

“Understanding Hyperion and how it compares to similar recent structures can give insights into how the universe developed in the past and will evolve into the future, and allows us the opportunity to challenge some models of supercluster formation,” said team leader Olga Cucciati of Istituto Nazionale di Astrofisica Bologna in a press release. “Unearthing this cosmic titan helps uncover the history of these large-scale structures.”

The discovery will be published in a future edition of Astronomy & Astrophysics.