Astronomers Discover a Second Giant Planet In a Nearby Star System 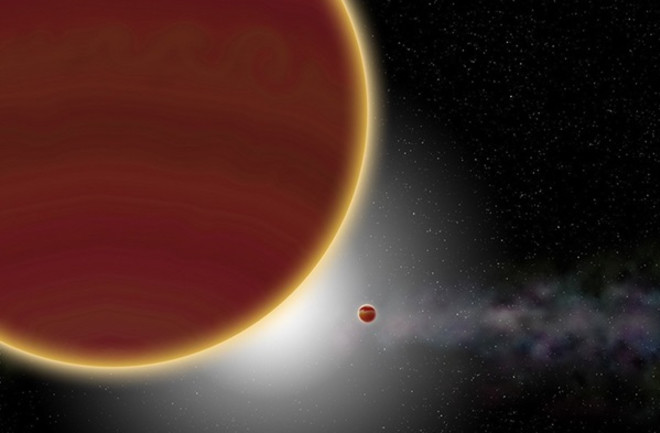 Beta Pictoris c, the large planet in the foreground of this artist’s concept, orbits the star Beta Pictoris much more closely than Beta Pictoris b, which is a similarly massive planet located farther out in the system. (Credit: P. Rubini/A.M. Lagrange)

The Beta Pictoris system swirls with activity — a dusty disk of debris, comets falling toward the central star, and at least one giant planet. And now, astronomers have uncovered evidence for yet another planetary Goliath, some nine times the mass of Jupiter, lurking within the mysterious system.

A Closer Look at Beta Pic

At only 23 million years old, Beta Pictoris, or Beta Pic, is a relatively young star. And located just 63 light-years from Earth, the system richly rewards those who study it. In fact, Beta Pic has been revealing secrets about the dynamics of planetary formation for the past 30 years.

In 2008, astronomers discovered one massive super-Jupiter there, Beta Pictoris b. However, its odd, tilted orbit indicated that another planet might be hiding in the system, says Dániel Apai, associate professor of astronomy and planetary sciences at the University of Arizona. He says that in the past three decades, observations of the system revealed many components that seemed out of plane and misaligned. The new research could explain this. “

A violent past encounter of the two super-Jupiters may be the source of the mess in this planetary system,” Apai said.

Evidence for the new planet, Beta Pictoris c, was found using the radial velocity method, which indirectly detects a planet by measuring how its host star wobbles around the system’s overall center of mass. Though this technique has helped astronomers find planets orbiting stars similar to the Sun and cooler, this is the first time it has been used to detect a planet around a star as massive and hot as Beta Pictoris, lead author Anne-Marie Lagrange of the National Centre for Scientific Research (CNRS) in France said. “Its spectrum is very different from that of a solar-type star and much less adapted to planet searches,” she explains.

This diagram shows the relative positions of Beta Pictoris b and c around the system’s central star, surrounded by a disk of debris. (Credit: P. Rubini/A.M. Lagrange)

The system’s first planet, Beta Pictoris b was found differently, by direct imaging. Maxwell Millar-Blanchaer, a scientist at NASA’s Jet Propulsion Laboratory who focuses on exoplanets, said that the news about Beta Pictoris c is incredibly exciting because of the possibilities it opens up for comparative atmospheric studies of the two planets, which have similar masses.

“The wealth of discoveries in the system has given us the ability to build a much more complete understanding of this system than for any other planetary system of its age, which in turn has given us a deeper grasp on its planet formation and evolution history,” he says.

However, Ignas Snellen, an astronomy professor at the University of Leiden in the Netherlands who was not involved in the study, sounds a note of caution. “There is indeed evidence for a planet, but I personally do not think it is yet enough to be certain,” Snellen said. If Beta Pictoris c’s existence is confirmed, he says, researchers will have to rethink their understanding of the system, including measurements of the first planet’s mass and the behavior of comets there.

Lagrange and her team have already called for researchers to reinvestigate the dynamics of the Beta Pictoris system in light of this recent discovery. She says she’s looking forward to getting more data from the Gaia spacecraft and hopes to image the new planet and determine its orbit more precisely.