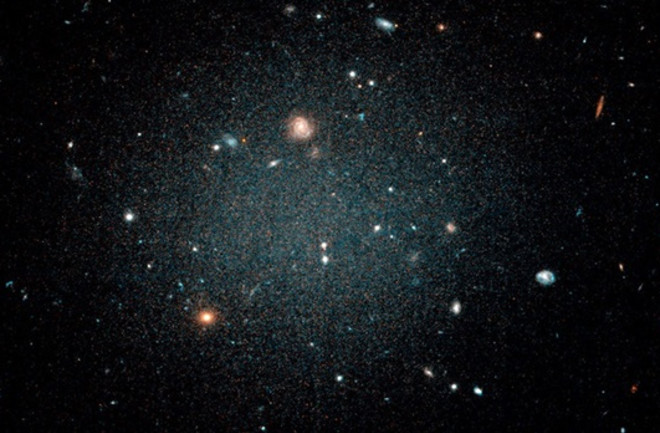 NGC1052-DF2 is a large, but very diffuse galaxy located some 60 million light-years away. This image of the galaxy, which is thought to contain a negligible amount of dark matter, was captured by the Advanced Camera for Surveys on the Hubble Space Telescope. (Credit: NASA/ESA/P. van Dokkum (Yale University)) One year ago, astronomers announced their surprise discovery a galaxy almost entirely devoid of dark matter. As the first galaxy ever found lacking the elusive substance — which is thought to account for 85 percent of the universe's mass — the news rippled through the astronomical community. This left some researchers delightfully intrigued, and others understandably skeptical. "If there's [only] one object, you always have a little voice in the back of your mind saying, 'but what if you're wrong?'" astronomer Pieter van Dokkum of Yale University, who led last year's ground-breaking study, said in a press release. "Even though we did all the checks we could think of, we were worried that nature had thrown us for a loop and had conspired to make something look really special whereas it was really something more mundane." Now, a new study published in The Astrophysical Journal Letters on March 27 shows van Dokkum and his team had it right all along. According to the work, they've confirmed a ghostly galaxy located some 60 million light-years away named NGC 1052-DF2 (DF2 for short) has virtually no discernible dark matter. Furthermore, a second study published March 20 in the same journal announced the discovery of yet another dim and diffuse galaxy with a dearth of dark matter, nicknamed DF4. Taken together, the new papers show DF2 is not alone, but instead part of a larger and previously unknown population of galaxies that have seemingly freed themselves from the bonds of dark matter. This new research may have dramatic implications for prevailing theories about the formation and evolution of galaxies, as well as the true nature of dark matter itself. "The fact that we're seeing something that's just completely new is what's so fascinating," said Shany Danieli, a graduate student at Yale University and lead author of the latest study on DF2. "No one knew that such galaxies existed, and the best thing in the world for an astronomy student is to discover an object — whether it's a planet, a star, or a galaxy — that no one knew about or even thought about."

The strange galaxy DF2 is a member of a relatively new class of galaxies called ultra-diffuse galaxies (UDGs). Though UDGs can grow as large as the Milky Way in size, these faint specters contain hundreds to thousands of times fewer stars. This means you can basically see right through them, which makes UDGs very difficult to observe in detail. DF2 is a hazy galaxy that's part of a larger group dominated by the massive elliptical galaxy NGC 1052. Initially, the researchers were drawn to the innocuous galaxy because it didn't appear the same in images captured by the Dragonfly Telephoto Arrayand those obtained by the Sloan Digital Sky Survey (SDSS). Dragonfly saw DF2 as a blob of dim light, while SDSS saw a group of point-like sources. Upon closer examination using Hubble's Advanced Camera for Surveys and the 10-meter W.M. Keck Observatory, the researchers determined DF2 is a transparent UDG that rivals the Milky Way in size but contains roughly 200 times fewer stars. "I spent an hour just staring at the Hubble image," van Dokkum said in a press release last year. "It's so rare, particularly these days after so many years of Hubble, that you get an image of something and you say, 'I've never seen that before.' This thing is astonishing: a gigantic blob that you can look through. It's so sparse that you see all of the galaxies behind it." With the new views of DF2, van Dokkum and his team identified 10 globular clusters (large groups of old stars) inside the galaxy and found they are moving three times slower than expected. This suggests that DF2 only contains, at most, a miniscule amount of dark matter. After all, if it had more mass than what's visible, the clusters would orbit much faster.

A Second Look at a Ghost

Because one of the major tenets of good science is reproducibility, van Dokkum and his team have spent the past year using the Keck Cosmic Web Imager (KCWI) to improve the precision of their previous measurements. "KCWI is unique because of the combination of its large survey area," said Danieli. "The instrument not only allows us to see the whole galaxy at once, its high spectral resolution also enables us to measure the mass accurately. There is no other instrument in the world that has those two properties." Armed with even more precise measurements for the speeds of globular clusters inside DF2, the researchers again calculated the galaxy's mass. As before, their results show the amount of dark matter in DF2 is basically nil.

While working to confirm DF2 is truly a galaxy deficient in dark matter, the researchers were simultaneously searching for a second example of a galaxy made exclusively out of normal matter. And they found it in DF4. "Discovering a second galaxy with very little to no dark matter is just as exciting as the initial discovery of DF2," said van Dokkum, lead author of the DF4 paper. "This means the chances of finding more of these galaxies are now higher than we previously thought. Since we have no good ideas for how these galaxies were formed, I hope these discoveries will encourage more scientists to work on this puzzle." According to the study, DF2 and DF4 are very similar in terms of size, surface brightness, morphology, and distance. Because of this, the paper says, "We conclude that NGC 1052-DF2 is not an isolated case but that a class of such objects exists. The origin of these large, faint galaxies with an excess of luminous globular clusters and an apparent lack of dark matter is, at present, not understood."

o determine how quickly the globular clusters were rotating around DF2, the researchers analyzed the absorption lines of spectra taken with the Keck Observatory. This allowed them to determine each cluster’s velocity, which they then used to calculate the overall mass of the galaxy. (Credit: Gemini Observatory/NSF/AURA/W.M. Keck Observatory/Jen Miller/Joy Pollard)

With a sample size of just two galaxies, it's hard to draw any sweeping conclusions just yet. But by showing that some galaxies contain no appreciable dark matter, the team has surprisingly provided strong evidence for the existence of dark matter. Because the effects of dark matter are evident in every other known galaxy except DF2 and DF4, the team's findings indicate dark matter must be a tangible substance that is separable from normal matter. This means that some alternative theories to dark matter, such as Modified Newtonian Dynamics (MOND) — which introduces extra gravitational forces on galactic scales — fall flat. "We hope to next find out how common these galaxies are and whether they exist in other areas of the universe," said Danieli. "We want to find more evidence that will help us understand how the properties of these galaxies work with our current theories. Our hope is that this will take us one step further in understanding one of the biggest mysteries in our universe — the nature of dark matter."