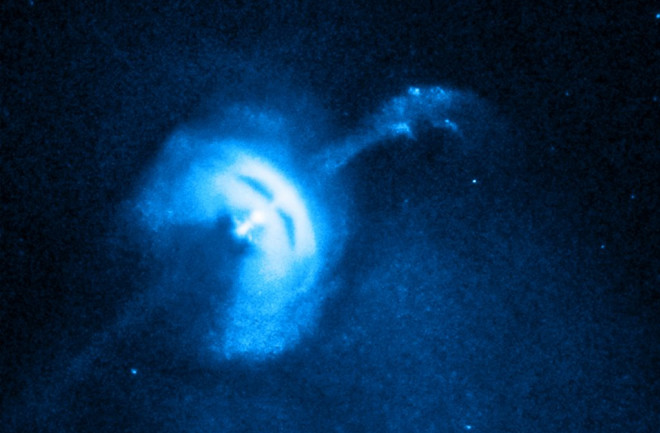 The Vela pulsar is known to glitch something like once every three years, when it speeds up for a few seconds. (Credit: X-ray: NASA/CXC/Univ of Toronto/M.Durant et al; Optical: DSS/Davide De Martin)

When a massive star dies, it leaves behind a dense core called a neutron star. Many of these exotic suns spin rapidly, sending out beams of radiation like lighthouses, and these are called pulsars. They can rotate thousands of times a second, and spin so steadily that they can be used as cosmological clocks – except sometimes, when they glitch.

Some five percent of pulsars are known to glitch, when they spin faster for only a few seconds. It’s a puzzling hiccup in their otherwise precise spin rates. One example is the Vela pulsar, which sits roughly 1,000 light-years away from Earth and glitches as much as once every three years. It lurks inside the cloud of gas and dust left over from when its star went supernova more than 10,000 years ago.

In 2016, the Vela pulsar glitched again, and astronomers caught the event with the Mount Pleasant Radio Observatory in Tasmania, Australia. Some of the details of the event helped to back up astronomers theories and models of these stellar hiccups. But the pulsar also revealed a totally new surprise: the neutron star actually slowed down briefly just before the faster rotation kicked in, marking the glitch itself.

Astronomers led by Greg Ashton from Monash University in Australia published their findings in Nature Astronomy on August 12.

Slow Down and Speed Up

It’s not entirely clear what’s making these pulsars glitch. Astronomers’ best understanding is that an inner layer of the star suddenly sloshes outward. When it hits the pulsar’s outer crust, it causes the star to spin faster, though it quickly reverts back to its previous spin rate. The whole event was over in less than 13 seconds.

The 2016 observations of the Vela pulsar glitch are some of the most detailed ever made of such a glitch. In general, their observations matched with what astronomers saw during glitch observations in 2000 and 2004, though those came from a less sensitive telescope. The big surprise for Ashton’s group was the pulsar slowing down in the seconds just before it sped up.

“We actually have no idea why this is, and it’s the first time it’s ever been seen,” Ashton said in a press release. “It could be related to the cause of the glitch, but we’re honestly not sure.”

There’s a lot yet to learn about pulsar glitches in general, but other astronomers will be on the lookout for these slow-down periods as well as any speed-up glitches.

For now, Ashton’s group says they’ll keep studying the Vela pulsar outside of glitches, hoping to better understand the strange star. It’s anyone’s guess as to when the next glitch will happen.