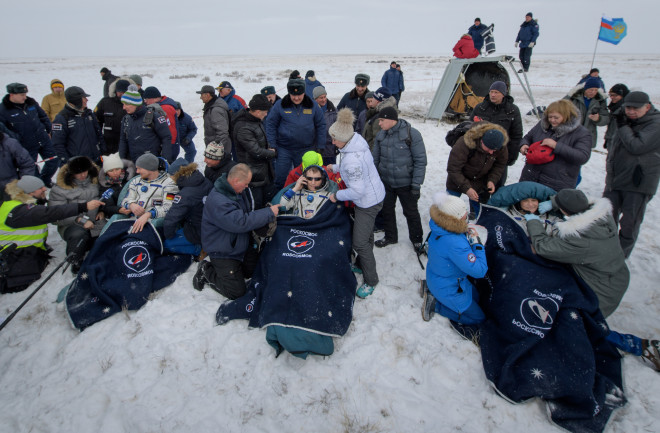 Last night (Dec. 19), a NASA astronaut, a German flight engineer and a Russian cosmonaut landed safely back on Earth after six months of hard work in space. Yesterday, the three astronauts buckled into the cramped descent module of the Soyuz MS-09 spacecraft, undocked from the International Space Station, and began the three-and-a-half hour journey home to Earth. As the craft neared the planet's surface, it deployed a massive orange-and-white parachute which slowed its descent through the clouds to the frozen ground below.

Shortly after landing, the Soyuz MS-09's orange-and-white parachute can be seen on the snowy ground. (Credit: NASA/Bill Ingalls) The Soyuz craft touched down in snowy Kazakhstan near the town of Dzhezkazgan at 12:02 EST (11:02 a.m. local time). Carrying Expedition 57 Commander Alexander Gerst, Serena Auñón-Chancellor, and Sergey Prokopyev, the craft landed successfully with all three crew members healthy and safe inside. As soon as the craft landed, Russian recovery crews, medical personnel, and both U.S. and European Space Agency support teams rushed to the capsule. They helped the crew members out of the descent module and ensured that they were unharmed. Despite their safe landing, the astronauts will still need significant time and assistance in re-adapting to Earth's gravity. [embed]https://twitter.com/NASA/status/1075635769631494144[/embed]

Thankful to be Home

Thankfully this landing was successful, but it did carry additional risks. This past summer, astronauts noticed a dip in pressure aboard the space station. This led them to discover a hole in the Soyuz MS-09's orbital module. And, while the hole was quickly patched, Prokopyev and fellow Russian cosmonaut Oleg Kononenko cut out pieces of the module's external hull during a spacewalk just a few days ago. The hole was patched once again, but the crew's flight home did come with the risk that the orbital module would once again spring a leak. The crew traveled home from space in the descent module, sealed off from the patched-up orbital module. But, according to Jonathan McDowell, an astronomer at the Harvard-Smithsonian Center for Astrophysics who keeps track of spaceflight events, this could prove dangerous if the module sprung a leak at the wrong time. A leak, though unlikely, could have pushed the craft in the wrong direction. Luckily, nothing of the sort occurred. These astronauts have been looking forward to life back on Earth for some time. Last month, when asked in an interview with CBS News about what she was looking forward to most after returning home to Earth, Auñón-Chancellor said: "That’s easy. Family. That’s what you miss the most up here. I don't think you ever really get used to it. You have reminders, we have pictures, we get special video conference calls, but it's not like being in the arms of your loved ones." After family, Auñón-Chancellor said “would be just the feelings of Earth. For example, the wind, the rain. We were watching a video the other day and I remember being very jealous of watching somebody stand by the ocean because I knew they could feel the wind and smell the sea. And we can’t do that up here.”