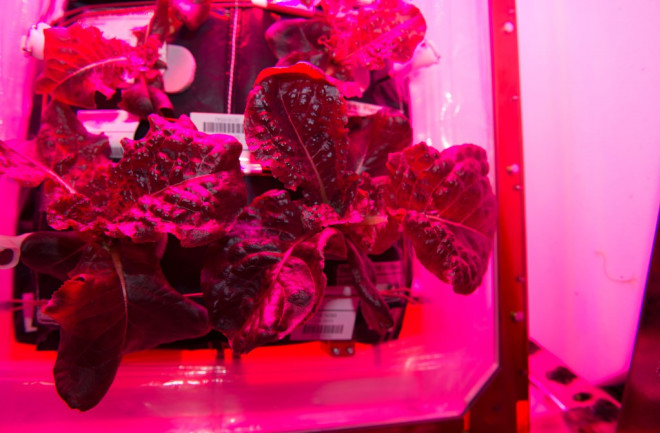 "Outredgeous" red romaine lettuce grown on the ISS. Credit: NASA A plain bite of lettuce was "awesome," astronauts aboard the International Space Station concurred. It helped that it was a rare bite of fresh vegetable. And it was also a tasty milestone in spaceflight history: the first time astronauts ate food grown and harvested in space. The garden, called Veggie, is part of NASA's research into food provision for a future manned mission to Mars.

An earlier crop of romaine lettuce was grown last year and returned to earth for safety analysis in October 2014. It passed the test, and now astronauts are growing both lettuce and zinnias under Veggie's LED lights. (The pinkish light is the combination of red and blue LEDs, which are more efficient in driving plant growth.) The red lettuce was chosen, NASA said on the ISS Facebook page, "because it grows well, tastes good, and has low natural microbial levels. In addition, red crops have higher levels of antioxidants, which could help astronauts stay healthy." The flowers are partly of interest to see how they pollinate in zero gravity, which will be important to future attempts to grow fruit, said Paul Zamprelli of Orbitec, the company that developed the Veggie greenhouse.

The astronauts cleaned the greens before eating them and they will eat half the harvest, saving the other half to be sent back to Earth for analysis. Small cabbage and tomatoes are next in the greenhouse's sights, NASA said on Facebook. Longer-term, they've got even tastier things in mind:

If we want beer: yes to the grains. Leafy greens, peppers, tomatoes. Potatoes and sweet potatoes are after vegetables. Then soybeans and grains. Grains need more equipment - we are on a stepping stone path to grains.

Though beer would no doubt make future Mars crew happy, NASA says the sheer act of gardening is itself a psychological benefit on long missions. "Besides having the ability to grow and eat fresh food in space, there also may be a psychological benefit," said Gioia Massa, NASA payload scientist for Veggie. "The crew does get some fresh fruits or vegetables, such as carrots or apples, when a supply ship arrives at the space station. But the quantity is limited and must be consumed quickly." What might those meals look like? Check out our feature article of the future of food on Mars.