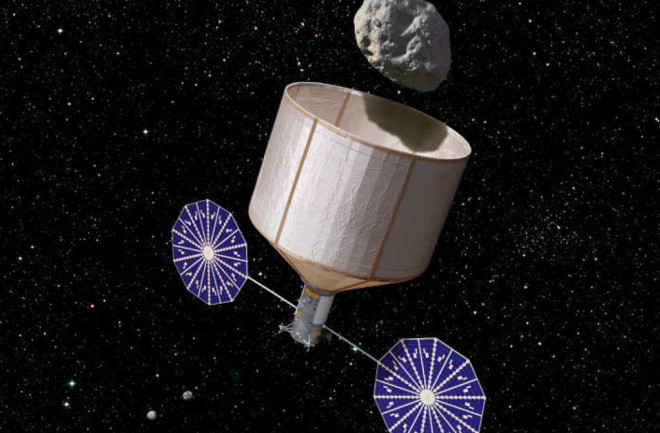 Illustration of the proposed asteroid retrieval spacecraft. So far our galactic adventures have included landing men on the moon, taking pretty pictures of Saturn, and roaming the surface of Mars. So what's next on NASA's to-do list? Perhaps snagging an asteroid to keep in our own backyard. Researchers from the Keck Institute for Space Studies proposed a plan [pdf] in April to bring an asteroid into the moon's orbit so astronauts can study it up close. How big an asteroid are we talking? Researchers said the sweet spot would be right around 500 tons and 20 feet in diameter---big enough to locate but small enough to transport. After finding such an asteroid, researchers want to send a robotic spacecraft to bag and drag the asteroid into the moon's orbit. The asteroid would in effect become the moon's own mini moon. The round-trip journey could take up to a decade, which would give NASA enough time to set up a manned mission to the asteroid to study it up close and personal. So far NASA has not turned the proposal down. The proposed mission's price tag is a couple billion dollars, comparable to that of the Curiosity mission. But this is a small price to pay for the lofty benefits the research team says the mission will have for future of space travel: A) mining asteroids for valuable minerals like platinum, B) using asteroids' oxygen, carbon and hydrogen to refuel spacecraft in space, C) determining how to deflect asteroids so they don't smash into Earth, and D) bringing humans one step closer to creating permanent settlements in space. Most importantly, the report states, "Such an achievement has the potential to inspire a nation." Seems like the rest of the world would be pretty excited, too. Image courtesy of Rick Sternbach / KISS