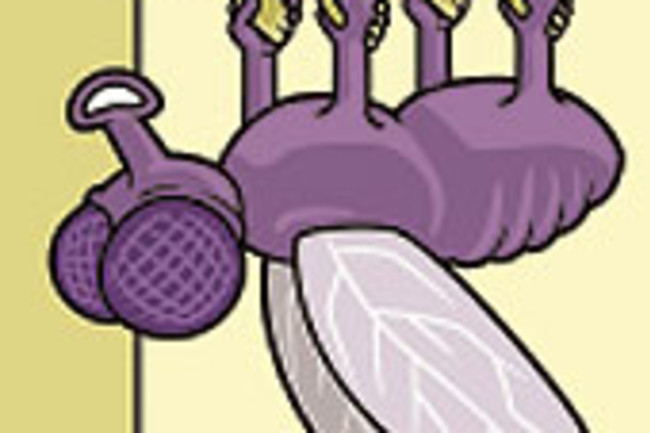 How do flies walk on the ceiling? Andrew Frame, Sarnia, Ontario

Anne Peattie, a biologist at the University of California at Berkeley, responds:

In addition to tiny claws, flies have specialized adhesive pads on their feet called pulvilli. These are covered with minute hairs that are between 2/10,000 and 2/1,000 of an inch long, each with a flattened tip. Scientists speculated that because they were curved, flies’ foot hairs must be tiny hooks, latching onto microscopic irregularities in surfaces. “Hairy” adhesives in other organisms such as beetles, spiders, and geckos were postulated to work the same way. Later research showed that such hairs were flexible and didn’t behave like hooks at all. Many animals adhered strongly to both smooth and rough surfaces. Scientists discovered that flies and beetles secrete a sticky fluid over their feet, which seems to act like a glue. The feet of spiders and geckos, in contrast, are perfectly dry, which suggests these animals employ intermolecular forces to adhere to various surfaces. Such observations leave us with more questions. Why, for instance, would lightweight flies need glue to stick to the ceiling, while much heavier animals like geckos don’t? And how do flies detach once they’ve “glued” themselves to a surface? We won’t understand the true nature of how flies actually walk on the ceiling until these questions are answered.